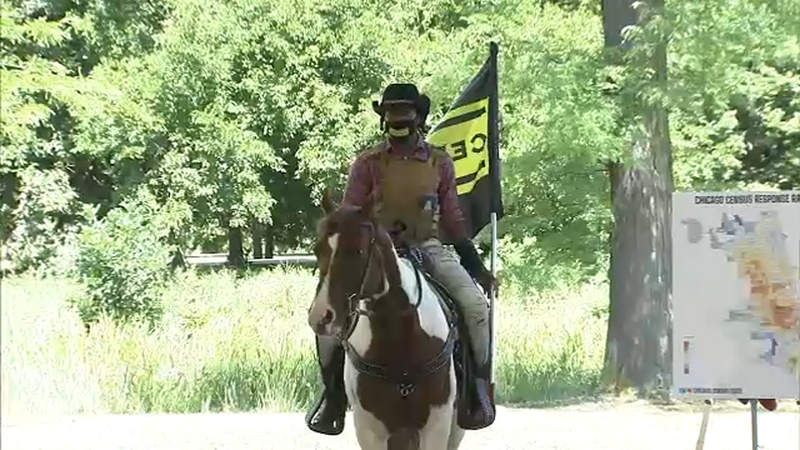 Look out for Chicago's 'Census Cowboy'

CHICAGO (WLS) -- Mayor Lori Lightfoot made a new plea to Chicagoans Monday, urging them to take part in the 2020 Census.

The mayor said only about 55% of the city's residents have filled out the online questionnaire, however Illinois is said to have a more than 66% response rate.

The mayor spoke at an event on the city's West Side Monday where ward response rates are as low at 40%.

Lightfoot introduced the "Census Cowboy," who will be visiting neighborhoods with low response rates.

"If you see the Census Cowboy come into your neighborhood, that's not a good thing. That means you need to step up and do your part," Lightfoot said.

The cowboy is Adam Hollingsworth, also known as the Dreadhead Cowboy, who is often seen riding his horse through the streets of Chicago.

This buckeroo is bringing the old town road to the streets of Chicago.

Earlier this month Lightfoot also launched a citywide challenge to try an encourage residents in all 50 wards to take part in the 2020 census.

Each ward will compete to see who makes the most progress over the next ten days and starting on July 9, progress can be tracked on a virtual leaderboard at census2020.chicago.gov.
The winner of the challenge will get ice cream for all young people in the ward.

The mayor's office said the city could lose between $1,400-$1,800 every year for each resident missed by the census. For more information on completing the census, visit my2020census.gov.