CHICAGO (WLS) -- Chicago continues to roll out the red carpet for the trapper who caught the Humboldt Park alligator dubbed 'Chance the Snapper.'

Frank Robb, who was called on by the city, threw out the first pitch at Wrigley Field Tuesday night following the announcement of the gator's capture.

"Thankfully, I threw a nice strike, I think," Robb said. "Maybe it was a tad low, but it wasn't in the dirt, that's for sure."

He was also given the honor of turning on one of the city's crown jewels, Buckingham Fountain, on Wednesday morning.

The gator trapper from Central Florida continued to get a first class tour of the city celebrating him, including a treat to deep dish pizza.

He also visited the animals at Chicago Animal Care and Control and toured Navy Pier.

Robb is amazed by the reception he's been getting from a town not used to gator hunts.

"A blessing doesn't quite cover it," Robb said. "When I came here, I had a plan where I was gonna try to get in here, accomplish the job. I had set forth from the city of Chicago and get outta here and nobody ever know I was here."

But plans change and Robb has found himself at the center of a summer feel good story that landed him in the local and national spotlight.

"We have a deep debt of gratitude for what he did," said Chicago Park District Superintendent Mike Kelly. "Let's face it. There was an alligator in the water. It is a wild animal and we've got 300 kids in our day camp every day in that same park." 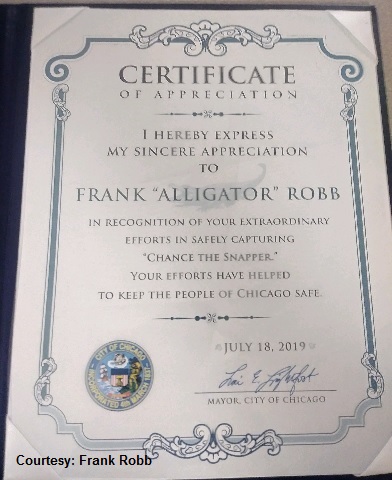 
The city still hasn't disclosed how much the gator's capture cost the city. But the mayor's office expects it will be "minimal."

Chicago police continue to investigate where the alligator came from, and how he wound up in the Humboldt Park lagoon.

Robb said the gator's build and behavior suggest the animal had been in captivity.

Chicago Animal Care and Control said Wednesday that Chance the Snapper would be leaving the Windy City, surely to the disappointment of some of the gator's fans.

But the good news is he's headed to what Robb called a "five star resort."

St. Augustine Alligator Farm Zoological Park in Florida confirmed to ABC 7 it will be welcoming Chance Thursday as its newest permanent resident.