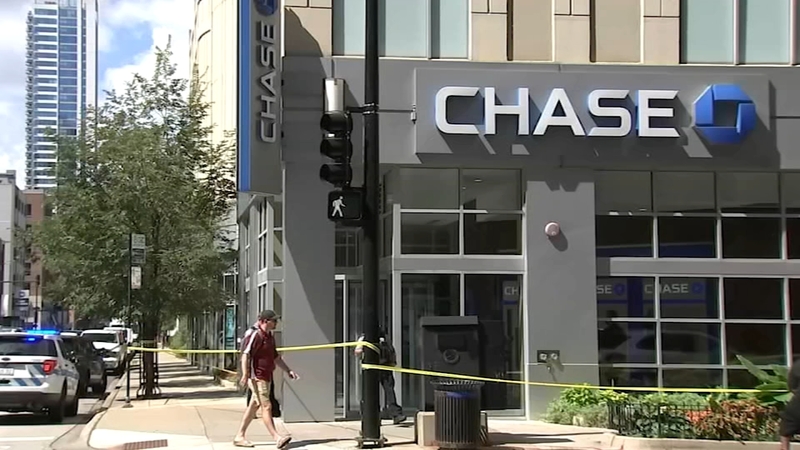 CHICAGO (WLS) -- A man has been charged in the fatal stabbing of a Chase Bank employee inside a branch a few blocks from Chicago's Magnificent Mile earlier this week.

Chicago police said Jessica Vilaythong, 24, was stabbed in the neck after having a "brief conversation" with Westbrooks inside the bank on the corner of Dearborn and Ohio in River North just after 11 a.m. Wednesday.

A memorial is growing outside the Chase Bank branch where Jessica Vilaythong, a 2020 University of Illinois grad, was murdered.

A man who did not want to be identified said he saw the suspect with a 5- to 6-inch knife.

"I saw a guy with a knife - a pretty big knife - with blood on it and he was running with a head of steam, and then, 30 seconds later, all the cops started coming then," he said.

"He was pretty upset and he was saying some vulgar words about Chicago and the police," another witness told ABC7.

Vilaythong died of her injuries on Thursday. She was a 2020 graduate of the University of Illinois, where she earned a bachelor's degree in psychology.

Former professors said in a statement: "Her adviser recalls always enjoying his meetings with Jessica. He remembers how proud she was to be a first-generation college student and how important completing her degree was to her."

"The incident itself, it was captured on video right away," Chicago Police Chief of Detectives Brendan Deenihan said. "So once it's captured on video, and it was high quality video, you saw specifically the shirt that the individual was wearing, the jogging pants, and then he had a shirt over his head."

With a detailed description of the suspect, police quickly swarmed the Loop. Westbrooks was taken into custody the day of the attack at 3:51 p.m. in the 0-100 block of N. State Street, police said.

"It really was a good job to get that person taken into custody that quickly," Deenihan said. "Especially, everybody was afraid that he could possibly harm or be harming somebody else."

Flowers sit outside the bank where Vilaythong was well-liked, and where colleagues are still shaken by her sudden death.

A Chase bank spokesperson said in a statement, "We are devastated by the passing of our colleague Jessica Vilaythong and extend our deepest sympathies to her family and loved ones during this incredibly difficult time. Jessica was a wonderful person and valued employee. She was extremely outgoing, passionate, hardworking, and quick to help clients. We will miss her greatly."

Westbrooks is well-known to Chicago police. He was charged with attempted murder in 2014, when he was accused of attacking two women at Navy Pier with a hammer. He was found not guilty by reason of insanity.

A motive behind the attack is still unclear. Area Three detectives are investigating.