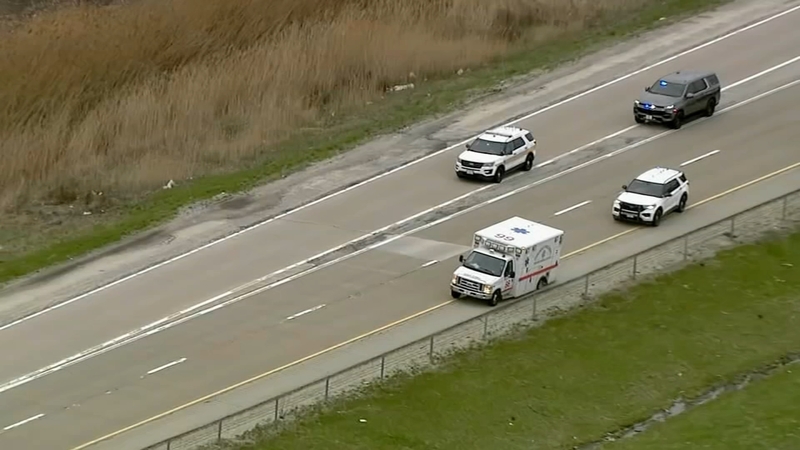 CHICAGO (WLS) -- The ambulance stolen from a Chinatown firehouse that led a nearly 80-mile police chase has been deemed a total loss by city inspectors.

The ambulance was stolen Monday afternoon and driven for two hours and nearly 80 miles, as police used various tactics to try to stop it, including rumble strips, which led to a smoking wheel rim for parts of the chase.

The Chicago Fire Department said Thursday the Chicago Department of Assets, Information and Services inspected the ambulance and deemed it a "total loss" and it "will be stripped out and scrapped."

The fire department has been told that, after an inspection and estimate of repair costs, the ambulance will be decommissioned as a complete loss and will not be repaired.

The man accused of leading officers on that wild pursuit through the city and suburbs in a stolen Chicago ambulance appeared in court Wednesday.

Herrington addressed the court and asked for a public defender to be assigned to his case and for permission to go stay with his mother in St. Louis, if he's able to post bond.

The Grundy County state's attorney's office said Thursday that Herrington's mother has asked that he be barred from coming to her house, if he is freed on bond.

A Grundy Court judge set bond at $20,000 for Herrington, who is charged with fleeing and eluding police while in possession of a stolen vehicle.

"Once we're able to evaluate all the evidence and see what else happened, additional charges might be added at a future date," Grundy County State's Attorney Jason Helland said.

Shortly after jumping off a Carbondale-bound Amtrak train on Monday afternoon, Herrington was seen on surveillance video driving off in an unattended ambulance parked outside Chinatown's fire station. He reportedly was trying to get to his mother's house near St. Louis.

After a nearly two-hour, 80-mile chase, Herrington finally pulled over near Dwight, where he was taken into custody by sheriff's deputies.

While the initial theft occurred in Cook County and the arrest was in Livingston, it was Grundy County that took him into custody and is now prosecuting the case.

"What the Illinois courts have ruled is that it's one act, one crime," Helland said, "because it's a continuous act of fleeing and eluding from Cook County, Will, Grundy, then to Livingston County,"

Herrington, who is a licensed Illinois attorney, acknowledged in court that he suffers from depression and general anxiety. He agreed to undergo mental health treatment and take any prescribed medication as a condition of bond.

Stating that he is unemployed and unsure that he will be able to come up with the $2,000 he is required to post, Herrington asked for his case be sped up. His next court date has been set for Thursday morning. If convicted he faces up to seven years in prison, but could also receive probation.