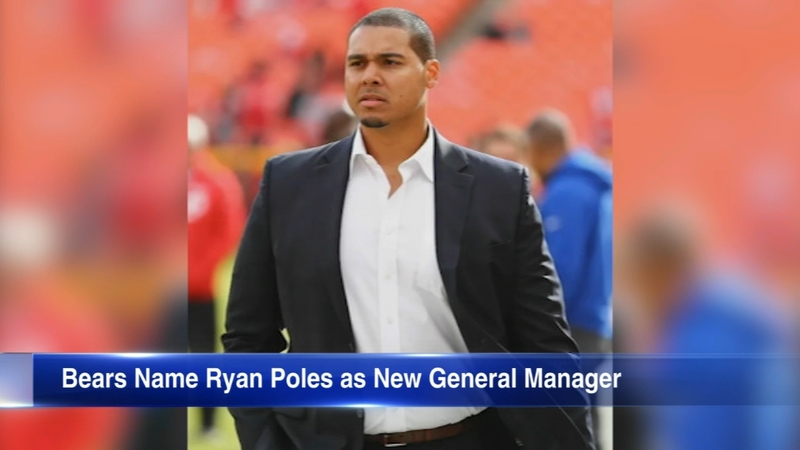 CHICAGO (WLS) -- The Chicago Bears have hired Ryan Poles to be their new general manager, the team said on Twitter Tuesday.

We have hired Chiefs' Executive Director of Player Personnel Ryan Poles as our General Manager.

The team was finalizing the deal earlier Tuesday, according to ESPN's Adam Schefter.

He replaces Ryan Pace, who was fired along with head coach Matt Nagy after the Bears went 6-11 and missed the playoffs.

"I am extremely grateful to George, the McCaskey family and the rest of the Bears organization for this opportunity," Poles said. "The Chicago Bears are one of the flagship franchises in the National Football League and are recognized as one of the most prestigious clubs in all of sports. It's an honor for me to join such a well-regarded organization. Together with my family, I'm looking forward to hitting the ground running to help get this organization, its fanbase and the city what they deserve: a winning team and a Super Bowl trophy."

After the firing of Pace and Nagy, Bears chairman George McCaskey formed a search committee to evaluate candidates for both GM and head coach.

Poles has spent 13 years in the front office of the Chiefs, rising from player personnel assistant in 2009 to becoming an executive director of player personnel . ESPN reports Poles was also a finalist for the Vikings' vacant GM position.

"We are thrilled to be able to add someone of Ryan's background and football expertise to our organization," said Chairman George H. McCaskey. "His accomplishments with the Chiefs speak for themselves and amplified the team's standing as one of the premier franchises in professional sports. We are confident that under his leadership, we will reach our goal of bringing a Super Bowl championship to Chicago."