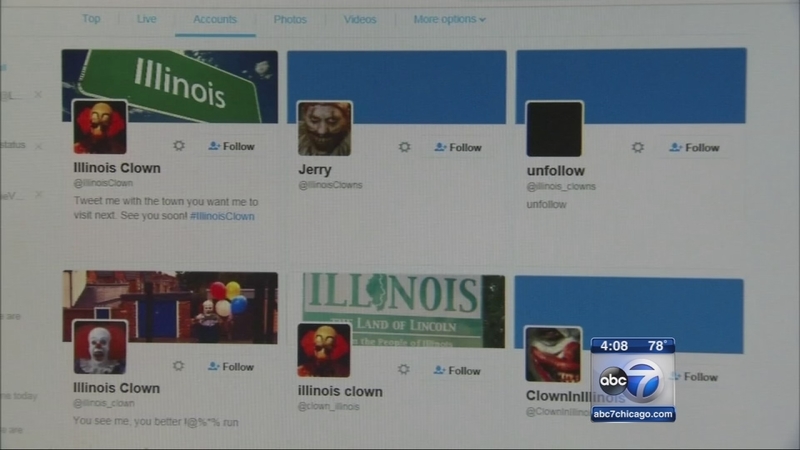 A Hammond, Ind., teenager was arrested in connection with a fake clown threat, just as worried parents accompanied their children to school on Wednesday because of creepy clown threats in the Chicago area.

From the western suburbs to northwest Indiana, there has been a rash of clown threats. In some cases, people have been spotted dressed as clowns, but in many cases, it's an internet hoax. Meanwhile, police and schools officials are trying to ease parents' fears.

In Hammond, Ind., a 16-year-old Hammond High School student was arrested Wednesday morning after police say investigators tracked down fake clown threats through a student-issued computer the student was using.

A Hammond police spokesman said the student was charged with intimidation for threatening other students. "The threat contained information that they (students) would be followed home from school and their throats would be slit...so it was very serious information," said Lt. Richard Hoyda, of the Hammond Police Department.

On Tuesday, a tipster told Hammond police about Facebook posts by an "Izzy Woods" clown persona. The posts contained threats against Hammond High School, Eggers Middle School and Hammond Gavit students. The post read: "If You Attend Hammond High Eggers or Gavit Do Not Walk to School ... If I catch You You Will Die."

But this wasn't the only threat.

"When I saw a lot of profiles, because it wasn't just one, I started to get scared and worried," said Adolfo Arzeta, a Hammond junior.

"It's close to Halloween and stuff. It's just sad," said Dillion Griffin, a Hammond junior.

School IT officials worked with police to monitor internet usage at various school locations. No arrests have been made in the "Izzy Woods" case and Facebook deleted the profile. Police are still working to find out who is responsible for the "Izzy Woods" threats.

The student who was arrested allegedly made threats against Hammond students as well as students at Clearfield High School in Clearfield, Utah. These transmissions were traced back to the student-issued Chromebook laptop.

Authorities asked the student to surrender their laptop to school officials, who confirmed that the threats were being sent from that computer. The case has been referred to the Lake County Indiana Juvenile Court.

Hoyda said the arrest was important in sending a message to other students about the seriousness of making such threats.

A report on Tuesday of three people in clown masks armed with a knife and gun confronting kids at Greenwood Elementary in Waukegan has been deemed false by authorities.

Police said Wednesday that investigators spoke to staff and neighbors, and then reviewed school video footage and determined that the claim was false.

The children who reported the incident have since told police that the story was made up, Waukegan police said.

However, police throughout the Chicago area are taking the reports seriously.

Once students accepted the friend requests, the clown threatened to come to school and "beat people up."

So what should students and parents do?

"Talk to someone - talk to a parent, talk to a teacher, talk to an authority figure. Also, send a message to the people who run Facebook. Block the person," said Paul Booth, an associate professor at DePaul University's College of Communications.

A spike in clown threats throughout the Chicago area has some parents worried.

A CPS statement issued Wednesday read: "Like many other school districts around the country, CPS has received reports of threats involving clowns. CPS takes these threats seriously and investigates them thoroughly in partnership with the Chicago Police Department. None of the threats have been deemed credible."

In Oswego Wednesday morning, students and parents heading to Thompson Jr High school were still nervous about a Monday post on social media that a person dressed as a clown would be showing up at the school.

"I used to like them, but after all the scary clown costumes, now I hate them," said Emma Meisenheimer, an 8th grader.

"I was kinda scared," said Kevin, a 6th grader.

Oswego School District 308 officials said it quickly realized the clown threat was fake, writing on their Facebook page: "we ask parents and students to be cautious of what they share via social media."

This week there were similar situations in northwest Indiana. Police in Hobart say people representing themselves as clowns said they'd turn up at area schools like Hobart Middle School. On Wednesday, patrol cars were in the parking lot, but no clowns.

Not all the threats are fake.

In Georgia, a clown followed two girls home. In Kansas, a clown stalked students at a high school.

At Thompson Junior High in Oswego, parents said they are keeping their eyes open for anything out of the ordinary. And telling their children to do the same.

On Tuesday, Chicago police investigated an incident involving a clown chasing a group of students and parents near a South Side school as reports of clowns approaching children and making online threats spread to Chicago.

POLICE WARNING IN LAKE COUNTY
In response to the rash of clown reports, the Lake County Sheriff's Office in the north suburbs issued a warning for Halloween safety, adding that they will be adding extra patrols when children are trick-or-treating and monitor registered child sex offenders.