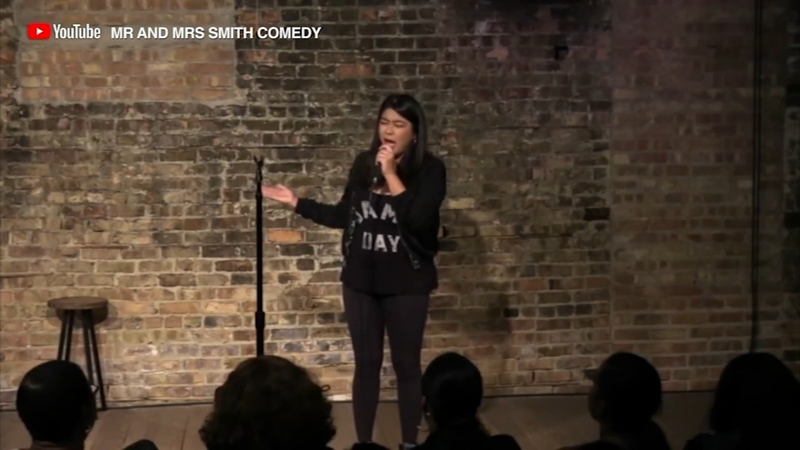 CHICAGO (WLS) -- On stage, comedian Leah Eva Smith uses her background as a Filipino immigrant to make people laugh and to challenge stereotypes..

"I want people to know that Asian women are funny. And we're not just your typical submissive people because if you've ever met my mother, she's definitely not submissive," she said.

Smith was just 7-years-old when she set her eyes on becoming a comedian, inspired by watching a Filipino comedian on televison.

Smith moved to U.S. when she was 12. The family settled in California. While in her 20s, Smith recalls keeping quiet about her comedy gigs in the Bay Area, afraid of disappointing her parents.

"Having Asian parents, they want you to go to school, be a doctor, lawyer, accountant, a business owner, but never in the artistic world, especially a comedian," she said.

Smith decided to move to Chicago to continue pursuing her dreams. She took classes at Second City.

When Smith was breaking into comedy, she saw few faces like hers. She said there are now more Asian female comedians, but still not enough. Smith is working to change that.

"I produce an Asian American comedy festival in Chicago because I was like there's a few of us here, why don't we do a show," she said.

She met her husband Ramon Smith through her work on the comedy circuit. They often share the stage together as Mr. and Mrs. Smith Comedy.

"If she wouldn't have followed her dream and driven across America to come to Chicago, we would have probably never met and Mr. and Mrs. Smith Comedy would never exist. I am glad it does," he said.

Her dream that went against the norm has paid off in more ways than one. Smith's parents are now among her biggest fans and they're pushing her to go as far as she can with comedy.

"Now my mom is telling me to go open up for Jo Koy. Why don't you go perform with Jo Koy? Why don't you be performing with Dave Chapelle? She is always like why aren't you doing this. I am like oh my god it's not that easy mom," she said.