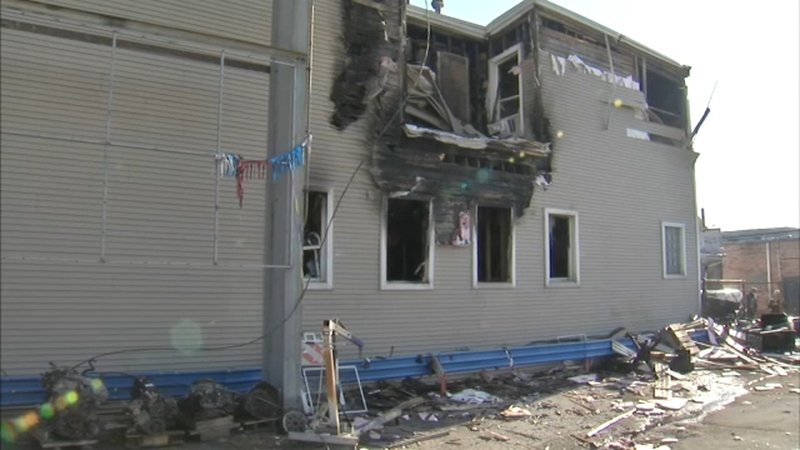 CHICAGO (WLS) -- A deadly fire Saturday night on Chicago's Northwest Side is the latest in a rash of serious blazes in the area over the last few days.

The American Red Cross is stepping in to help after one person died, a pet was killed and another person was injured in an apartment fire on the city's Northwest Side Saturday night.

As the investigation that claimed the life of an 81-year-old man continues, the second-floor tenants returned to their fire-damaged unit, hoping to be able to salvage something.

Julissa Duran and her family hope to salvage what belongings they can just a day after fire nearly levels the two flat where they live, killing their downstairs neighbor and leaving them homeless.

"I still can believe that everything I own is gone," Duran said. "All of our photos and memories."

The 19-year-old part-time radiology student said her parents managed to retrieve some important papers, some jewelry, and a few other things from the flames, but she wasn't able to save the textbooks she just bought for classes that begins Monday.

"I was going to start a math class on Monday but I dropped it now so I can get a refund, so we can use the money for clothes," she said.

Duran, her mom and dad, and her two younger siblings were out Christmas shopping at the time.

"We went to do some Christmas shopping and then I get a call from my friend saying my house is burning down," she said. "I thought he was joking and we come home to this."

However, the first-floor neighbor, 81-year-old Venancio Delfino was at home and tragically died in the fire, according to the Cook County Medical Examiner. Firefighters said another person was also seriously injured and was rushed to the hospital.

Two transports from the still and box on Grand. One victim very critical to community first. Second victim serious to west suburban. pic.twitter.com/mXPaqlq7Dd

A dog also died after the incident and another person refused treatment at the scene.

Sunday afternoon, the building's owner and landlord refused to say if the property is insured or if it had working smoke detectors.

The cause of the fire is unknown.

Crews had not been able to complete a search of the structure due to the building's instability as of later Saturday evening.

"The last thing we want is somebody getting hurt in a fire. Smoke detectors get you out early. Saves lives," said Deputy District Chief Robert Jurewicz with the Chicago Fire Department.

Fire officials, as well as the buildings department, are due back to the scene on Monday to begin their investigation once again.

A Chicago firefighter is also still seriously hurt as of Sunday morning, after a basement fire in the city's Belmont Central neighborhood Thursday morning.

On Friday morning, multiple firefighters were hurt in Cicero while trying to rescue one of their own.