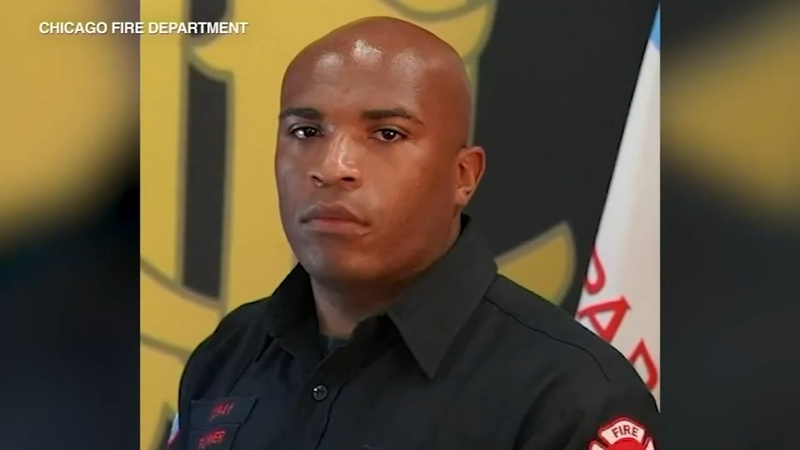 CHICAGO (WLS) -- Friends and family gathered Thursday to say their final goodbye at a funeral for a Chicago firefighter who died in the line of duty.

Hundreds of firefighters stood at solemn attention Thursday as pallbearers raised the casket carrying MaShawn Plummer's body to the fire truck for a procession to the cemetery. The funeral was steeped in honor and tradition as the 30-year-old firefighter was honored as a hero.

"There is a saying, I think at least, that if you love someone enough you would run into a burning building for them," friend Antwan Sayles said. "MaShawn did that for people he didn't know."

The 10,000-seat House of Hope church was filled with fellow firefighters, friends and family, as well as dignitaries including Mayor Lori Lightfoot and Fire Commissioner Annette Nance Holt. All were there to remember Plummer, who had been on the job for only a year before suffering fatal injuries fighting a house fire last month in the Belmont Central neighborhood. One resident also died in the fire.

"He was willing to do what others are unwilling to do, and tackle any obstacle in front of him," Nance Holt said.

Family members recalled that Plummer wanted to be a firefighter from an early age. He grew up in the Englewood neighborhood and went on to play football at Quincy University. He was a diehard fan of the Bears and White Sox.

"Coming from Englewood, like, you know, as a black male in Englewood, we tend to look up to the wrong things. And MaShawn didn't do that," friend Richard Harris said.

"MaShawn will always live in our hearts," his great uncle Willie Hudgins said. "We know he died doing what he did best, trying to save lives."

His family said Plummer's favorite phrase was "Make Them All Proud," or MTAP. He got the initials tattooed on his arm, and they said he lived those words every day.

'We had an angel amongst us,' fallen firefighter's mother says

The mother of fallen Chicago firefighter MaShawn Plummer speaks at his funeral.

"We was blessed, y'all. We had an angel amongst us, y'all," said his mother, Felicia Townsend Plummer. "My son sent me a sign: 'Mama, I got you. You gon' be OK. I got you.' That's the way he lived his life. And I am so honored that I can call him my son."

"He certainly gave his life for the city and to help others and he will be missed both in his family and his community and all first responders are a little sad today," said Kevin Graham, former FOP president.

Plummer was also a college graduate who had studied pre-law, but ultimately decided to join the fire department. His family said when he got that call, he was elated.

Plummer collapsed while battling a fire in the Belmont-Central neighborhood back on December 16. He was in the basement of a building on North Mamora and was pulled out and rushed to the hospital, where he later died from his injuries just over two weeks ago. A building resident was also killed in the fire.

Those that knew and loved him said Plummer lived to serve others and he deserves this honor.

"MaShawn is a brilliant person. It's such an unfortunate loss we are having today that we celebrate his life, but all of this attention, he is worth it every dime. It's still not even enough," said family friend Chonte McClain.

"He was just the person to love. It was that aura about him, you couldn't help but love him," said family friend Beverly Hudson.