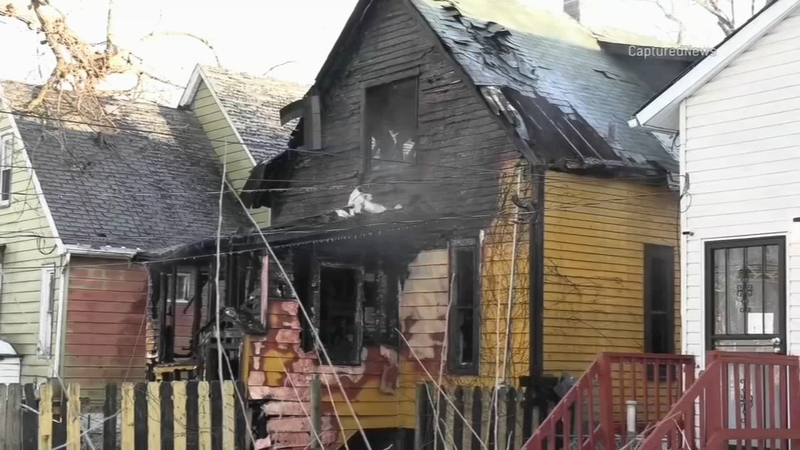 CHICAGO (WLS) -- Seven Chicago firefighters were injured Saturday while battling a large house fire in the city's Roseland neighborhood on the South Side.

Fire officials arrived at the home near 112th Street and Princeton Avenue just after 3:20 p.m. Saturday afternoon. Less than 10 minutes later, firefighters called for a "mayday."

A warm embrace is all Watts has left. She was walking back to her home of seven years from down the street when she saw it engulfed in flames.

"All of a sudden I heard a fire truck come by," she said. "[I] noticed that they were coming to my house!"

Watts said she has no idea why her house would have caught fire.

A neighbor captured cell phone video while at least 100 firefighters tackled the blaze before, suddenly, there was a loud explosion that rocked multiple homes.

It's believed there was a flashover at the fire, blowing four firefighters off the porch, officials said.

Several Chicago firefighters were hurt while battling a house fire Saturday afternoon on 112th and Princeton in Roseland, CFD says.

"Everything in there reached its ignition temperature, and once it got a source, it just kinda goes. Everything lights up, and it's the energy and force behind it that push," explained CFD Fire Commissioner Annette Nance-Holt.

The rare occurrence sent seven firefighters to the hospital, according to the Chicago Fire Department. Four were transported to Advocate Christ Medical Center and three were taken to Little Company of Mary Hospital.

Mayday update. Five CFD members are being transported. A sixth is being evaluated for possible transport. Christ and LCM hospitals. These are NOT life-threatening injuries. We believe there was a flashover at this fire.

By early Sunday afternoon, all seven firefighters had been released from the hospital, officials said.

"People don't realize. Every day, our firefighters and paramedics, they get up and go to work not knowing that day if they'll come back home. They put everything on the line to make sure we're safer," Nance-Holt added.

A resident was outside of the home when the fire department arrived, according to CFD. No one else was inside.

RELATED: Gary fire today destroys Denny's next to Love's gas station near I-80/94

Officials said there were no smoke detectors found inside the home.

As the firefighters recover, people on the block are working together to support their neighbor.

"If you need help, we are here," said neighbor Angie Willaims. "Place is here for you."

Officials said they expect to have an "after-action report" within the next few days.

"Try to determine, as we talk to all the members who were there on the scene, what actually occurred so that this doesn't happen again -- if it can be avoided," Nance-Holt said.

Mayor Lori Lighftoot said she has been in contact with the fire commissioner and is "grateful that there were no serious injuries."

Last night, several firefighters were injured responding to a fire in Roseland. I have been in constant contact with CFD Commissioner, Annette Nance-Holt, and I am grateful that there were no serious injuries.