Gas price has stabilized, but is expected to surge again
WLS
By Stephanie Wade 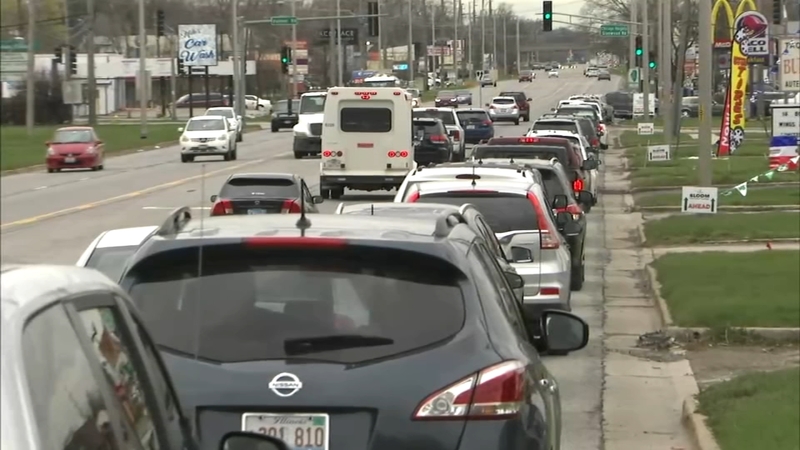 Suburban seniors get free gas; Wilson to hold another giveaway

That's why a gas giveaway Tuesday, and another announcement from businessman Willie Wilson are making news.

Attendees must be 65 or older and bring a valid state ID and mail that show proof of address in Bloom Township.

And the turnout was shocking. Hundreds of cars lined up along Halsted well before 9 a.m.

"I said if I'm going to go, I've got to get to bed early so I can get up early. So I drove out of the driveway at 5 o'clock," Pat Amadio said. "I'm a widow and I live on my Social Security and it helps. These people around here are probably having a fit because they can't get on the highway."

Hundreds of senior citizens showed up Tuesday morning at the Bloom Township Center to receive their free gas gift card.

"Oh yeah I got up at 6 o'clock in the morning. They say the early bird gets the worm," Chicago Heights resident Tommie Beasley said. "I think it's a great thing to do. You're blessing the people here of Chicago Heights."

"I need this because gas is getting to be too high," Willie Fleming said.

Cars took up an entire lane on Halsted for blocks.

"I knew we would have a line I figured to McDonald's, but when I ... said, 'oh, we've got to go," Bloom Township Administrator Leticia Johnson said. "We see that they have been largely impacted by the things that have been going on for the past few years and then with the dramatically increase in just living expenses, groceries and then gas, it's difficult."

"It's rough for everyone but especially on the seniors on a fixed income -- most of us are retired," Anntoinette Curry said.

The township said if they run out of cards, they'd consider another gas giveaway.

Meanwhile during a news conference Tuesday morning, mayoral candidate Wilson said he will do another $1 million gas giveaway.

This will be his third gas giveaway. The last one he held was worth $1 million.

"We believe we should be accountable to our next-door neighbor - those of us who can afford to do so," said Wilson, speaking to reporters at his home and office on the 49th floor of The St. Regis Chicago.

The $1 million giveaway is planned for Saturday at yet-to-be-announced locations throughout Cook County.

Wilson jumped into the 2023 mayoral race on April 11 with a $5 million contribution to himself and a burst of goodwill generated by his gas giveaways.

Three years ago, Wilson won 13 of 18 Black wards, finishing fourth overall with 10.6% of the vote. In the runoff, Lori Lightfoot won all of those wards - and all 50 wards citywide -after Wilson endorsed her over County Board President Toni Preckwinkle.

Wilson said Illinois drivers pay the second highest taxes at the pump in the nation.

Mayor Lori Lightfoot, after receiving some criticism, has also tweaked her gas card giveaway proposal once again, which will now go before City Council Wednesday.