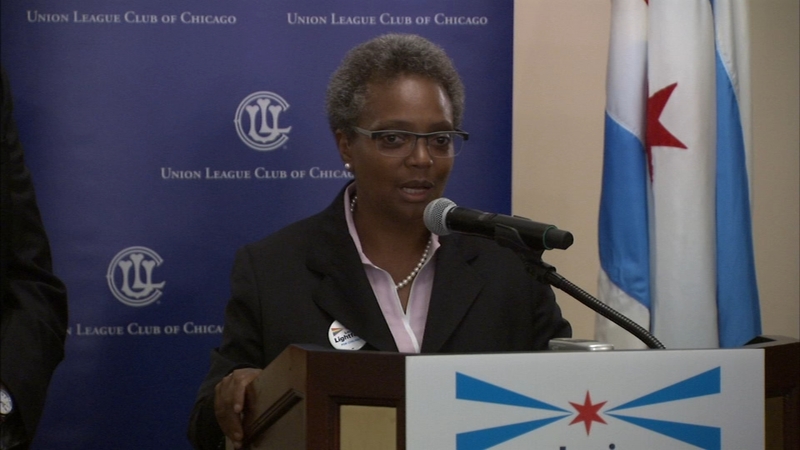 CHICAGO (WLS) -- Chicago mayoral candidate Lori Lightfoot is calling the system under Mayor Rahm Emanuel broken and corrupt. Tuesday Lightfoot laid out her plan for cleaning up city government with a series of ethics reforms.

Standing beside former alderman Dick Simpson who endorsed her today, Lightfoot said its time for change.

"We have to restore confidence in city government," Lightfoot said.

She called for, among other things, a two-term limit for the mayor and a ban on city employees holding outside jobs that conflict with city business.

"We are not going to continue to have aldermen who are profiting from their positions, that is unacceptable, it's unethical and it flies in the face of anything that remotely resembles good government," Lightfoot said.

She said people are fed up with the status quo.

"They really do believe that government doesn't work for them, and that the only way that you can actually get good city services is if you make a donation to the mayor, if you are one of the chosen few," she said.

Emanuel's campaign said in a statement, "Lori Lightfoot is flip-flopping on her record again, this time on ethics. If she wants to talk ethics, Lori cannot hide from misleading Judge Posner which led to her not getting a position in the Obama Administration."

Lightfoot's announcement comes as the Mayor released a new digital ad attacking Garry McCarthy, by connecting him to Donald Trump.

The ad features a clip of President Trump calling McCarthy "a phenomenal guy." The announcer then adds, "And there's mutual admiration."

McCarthy's campaign called the ad patently false adding, "Rahm should focus on his job of reducing gun violence, fixing pensions, and improving education across the city, instead of making up false stories and posting them on Facebook."

Lightfoot dismissed suggestions that McCarthy may be the candidate the mayor is most concerned about.

"It's very clear to me that they have a lot of fear of my candidacy. I see it, I hear it," Lightfoot said.