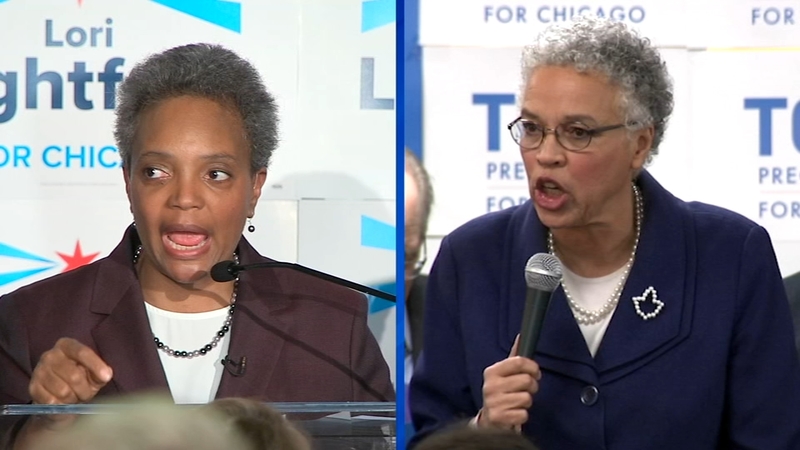 CHICAGO (WLS) -- The five week sprint to the mayoral runoff is underway, and it looks like it could turn negative very quickly.

Lori Lightfoot is preparing for a barrage of negative ads from her opponent Toni Preckwinkle.

Mayoral candidate Lori Lightfoot sat down with ABC7's Craig Wall with five weeks to go until the April 2 runoff election.

"When you have 100 percent name recognition, as Toni Preckwinkle does, and yet people don't want her, the only way you win is by tearing down your opponent," Lightfoot said. "We fully expect those attacks to come."

Preckwinkle launched the first salvo in her speech on election night. In a one-on-one interview with ABC7 Eyewitness News political reporter Craig Wall days later, she signaled that a theme of her campaign going forward will be the difference in political experience between herself and Lightfoot.

"I have been an elected official for quite some time. I was elected alderman five times; I was elected county board president 3 times; my opponent has never, never held elective office," she said.

Preckwinkle downplayed suggestions that she is worried about momentum Lightfoot may have from Tuesday night.

"You know, I think that in this campaign there have been negative ads across the board and I am going to try to make it clear to the voters my record and my goals, my vision for the city of Chicago. We're going to do that everywhere we can," she said.

Lightfoot, who has made this election about change, signaled former Cook County Assessor Joe Berrios could be part of her ad campaign against Preckwinkle.

"Joe Berrios presided over the most corrupt and frankly racist property tax assessment system maybe in the country," Lightfoot said. "The people he hurt are black and brown families, black and brown homeowners all over the city. Who supported him and defend him until the end? That's Toni Preckwinkle."

Money will be another factor in this race: Lightfoot has about $731,000 on hand, while Preckwinkle has more than six times that amount with nearly $4.7 million. But Lightfoot has now lifted the cap on donations for the runoff by self-funding her campaign with a $200,000 loan.
Report a correction or typo
Related topics:
politicschicagochicago mayor election
Copyright © 2022 WLS-TV. All Rights Reserved.
TOP STORIES
Person of interest in custody in Highland Park parade shooting: police
6 dead, 31 hurt in Highland Park parade shooting
Highland Park parade shooting victims range in age from 8 to 85
55 shot, 7 killed in July 4 weekend violence: CPD
More severe storms possible overnight in Chicago area: LIVE RADAR
Boy, 10, wounded while inside bedroom in Englewood
5 wounded in Parkway Gardens shooting
Show More
Chicago Weather: Heating up Tuesday
Jayland Walker was unarmed when 8 Ohio officers opened fire on him
Aurora celebrates 4th of July with annual parade
1 killed in Little Village hit-and-run
History of Nathan's 4th of July hot dog eating contest
More TOP STORIES News