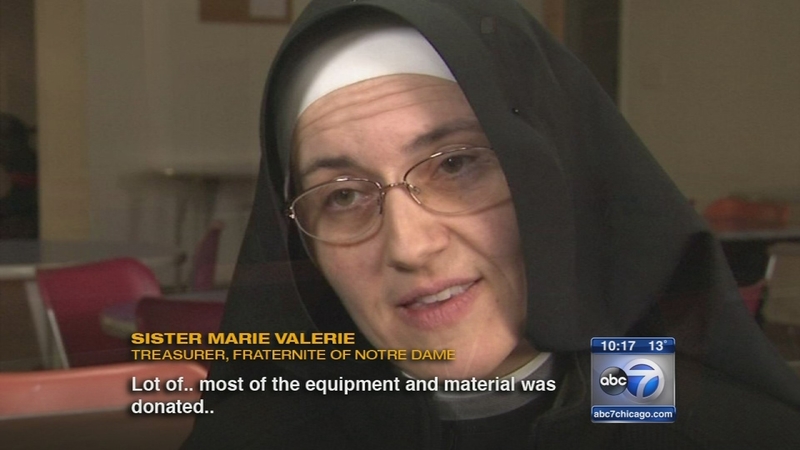 CHICAGO (WLS) -- In an exclusive report, the ABC7 I-Team looked into a small religious order in Chicago that has been all over the news lately after some nuns received public donations for a new heating system at their West Side church.

Nuns from a French religious order called Fraternite of Notre Dame last month were on Chicago TV - including ABC7 - describing how their heat broke down. The public has now contributed about a quarter of a million dollars to fix their boilers.

But since then, the I-Team has received questions about the order's standing in the Catholic Church and why it needs donations when it owns millions of dollars of property in McHenry County.

When word got out that these nuns who feed the poor were shivering through Chicago's record-cold February, they were invited onto TV and two internet funds were set up for contributions, now totaling more than $232,000. As the donations soared, the I-Team received viewer questions about 90-acres owned by the order behind an iron gate in Marengo.

"When they have millions of dollars in property here and now they are expanding and wanting to add a brewery and a winery and gift shop and school and all of those things and I couldn't understand why they couldn't afford to fix their church and why other people had to be responsible for that," said Judy Link, a Marengo resident.

A week before the boilers quit at the nuns' "motherhouse" on Chicago's West Side, the order filed this zoning permit request in McHenry County.

According to the request filed February 11, the order wants to build and operate a school with an attached dormitory; a nursing home with hospice, a commercial kitchen with facilities to brew beer and process grapes for wine; a gift shop and tasting area.

"When regular people want to build something they wait until they have a million dollars in the checking account, us we are different, by people see what we do," Sister Marie Valerie said with a heavy French accent during an interview with the I-Team. "We have some blue print people, an architect, doing their times, that gentleman wants to stay anonymous, he does a lot of work for us. This is how we start," said Sister Marie Valerie, who is the treasurer for Fraternite of Notre Dame.

It is the start of an ambitious construction project in rural Marengo on these 65 acres bought for about $2.5 million in 2003, and another 30 acres bought since then.

According to public records, the order has purchased land and homes worth more than $3 million in nearby Huntley, Harvard, southern Wisconsin and New York. An unknown amount was already spent on these grounds adorned by statues and a chapel that features an ornate altar.

"It took us two years and a half to build it. Most of the equipment and material was donated," Sister Marie Valerie said. "We built with our own hands."

Much of the work is documented in numerous videos on the order's website.

"A benefactor help us with down payment but every month we have to pay for our own mortgage so it's not easy," Sister Marie Valerie said.

The nuns - who say they receive no salary - insist that any new McHenry County project would be funded by donations, but not the money donated for the boilers in Chicago.

Residents who opposed the order's first expansion 10 years ago say they are mobilizing again to stop the new project.

"They're very secretive. We kept asking them where they got their money from because that was an expensive piece of property, it was $2 million I think, and they just said 'investments'," Link said.

The nuns call themselves a "traditional Catholic religious order" and some donors may believe that the organization is approved by the Vatican, but it isn't.

According to a spokesperson for the Chicago Archdiocese, the order's founder Bishop Jean Marie Roger Kozik "is not a legitimately ordained bishop in the Roman Catholic Church," and, Kozik says, is not a priest in good standing with the church. Because of that, the archdiocese says "Catholics should not attend mass" at the order's West Side church. And they say the nuns are not a religious order associated with the Roman Catholic Church.

The Archdiocese does say that the nuns are "good people of faith who do important work for the poor."

Bishop Kozik began the order in 1977 in France after reporting the Virgin Mary spoke to him. Now he lives - at least part-time - in Marengo. Kozik did not reply to the I-Team's requests for an interview.

There are numerous organizations like his around the world that describe themselves as a "traditional Catholic order" that follow older Catholic practices, but are not recognized by the Vatican.

As for the zoning board hearing, the order of nuns asked that it be moved to April 9.