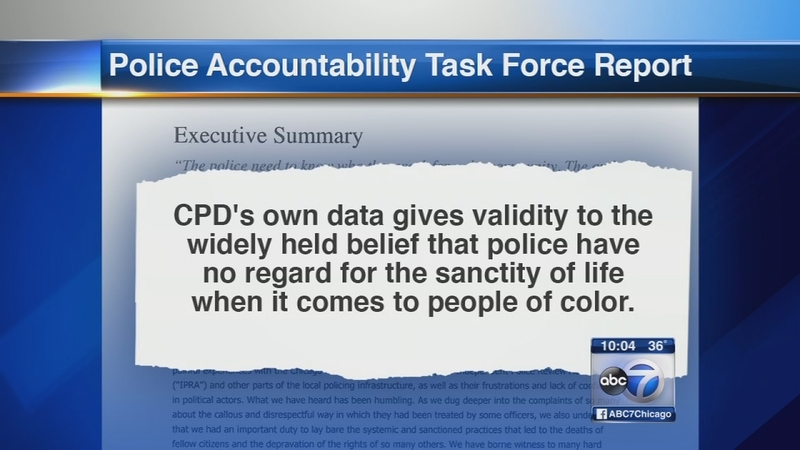 CHICAGO (WLS) -- We're getting a first look at the recommendations to address the crisis within the Chicago Police Department. It's all outlined in a critical report triggered by the Laquan McDonald shooting.

The scathing report all but calls the police department's track record "racist", its procedures "ineffective", and the results dangerous and damaging to the people of Chicago.

The Police Accountability Task Force called the police shooting of Laquan McDonald "the tipping point" and the police accounts of what happened the night an officer shot the teen 16 times "superficial and false." But that's just the beginning.

An executive summary of the report obtained by the Tribune and confirmed by Eyewitness News says the department is so flawed, "real accountability is nearly impossible".

"Laquan McDonald was shot October 2014. My son was killed by police December 2015. Change should have already been made," said Janet Cooksey.

Cooksey's son Quintonio LeGrier was mentioned in the report. It says: "CPD's own data gives validity to the widely held belief that police have no regard for the sanctity of life when it comes to people of color."

The task force spent several months getting an earful from angry Chicagoans. Its report agreed with many, saying the police have lost the trust of the public they serve.

How did it happen? The task force cites "racism" and a "mentality in CPD that the ends justify the means.

It has led LeGrier's mother to make a stunning appeal to young black men.

A spokesperson for the police union says he's concerned by the language used by the task force and feels its report is flawed.

All of these details are from just the first 18 pages of the report. Hundreds more are expected to be released by the task force on Wednesday.