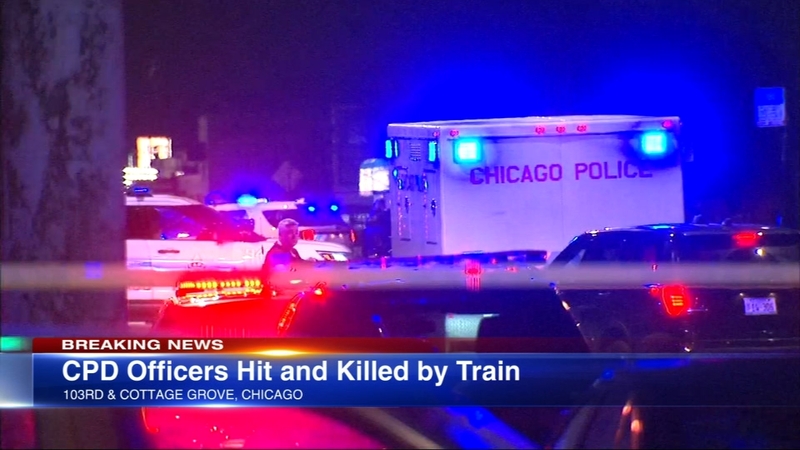 2 CPD officers killed by train on South Side ID'd

Chicago Police Superintendent Eddie Johnson said the officers responded to a ShotSpotter alert near 101st Street and Dauphine, where they gave chase to a suspect. At about 6:30 p.m., while they were investigating on or near the train tracks near 103rd Street and Cottage Grove, they were struck by a passing train and killed instantly, Johnson said.

The tracks are up a steep embankment and while it was not immediately clear how the officers ended up there, it's believed it may have been in the course of a foot pursuit.

"By doing the most dangerous thing any police officer can do, and that is to chase an individual with a gun, these brave young men were consumed by identifying a potential threat to their community and put the safety of others above their own," Johnson said.

Johnson identified the officers as 37-year-old Eduardo Marmolejo and 31-year-old Conrad Gary. He said Gary had been on the force for 18 months and Marmolejo for two and a half years.

Gary was the father of an infant, while Marmolejo was a father of three. Both officers were married. Johnson said they were working as partners Monday night, but he was not sure if they were regularly partners.

Johnson said 2018 has been an "immensely difficult" year for the Chicago Police Department in terms of officers killed in the line of duty, as well as an uptick in officer suicides. He noted it's been a particularly difficult year for the 5th District.

"Pray for the families of these two heroic young men, pray for the 5th District who, even tonight, will stop at nothing to safeguard the community," he said.

"This, I think it goes without saying, it's going to be a difficult period of time for the Chicago Police Department family. We as a city have to measure up and remind them they're part of our family," Emanuel said. "There are no words to express our grief, our sense of loss. This knocks you back on your heels. I think it's really important that we put our arms around the Chicago Police Department and support them at this critical juncture."

He also expressed condolences to the officers' families.

Two people were struck by a South Shore train on Chicago's South Side.

Johnson said a weapon was recovered at the scene and a person of interest is in custody and being questioned.

A weapon was recovered and a person of interest is being questioned at the site where two newly appointment #ChicagoPolice officers lost their lives protecting their community from a gunman.

Passengers on the Indiana-bound South Shore Line train waited on the train for about two and a half hours before they were placed on buses. Investigators took statements from the trains' passengers before taking them to buses.