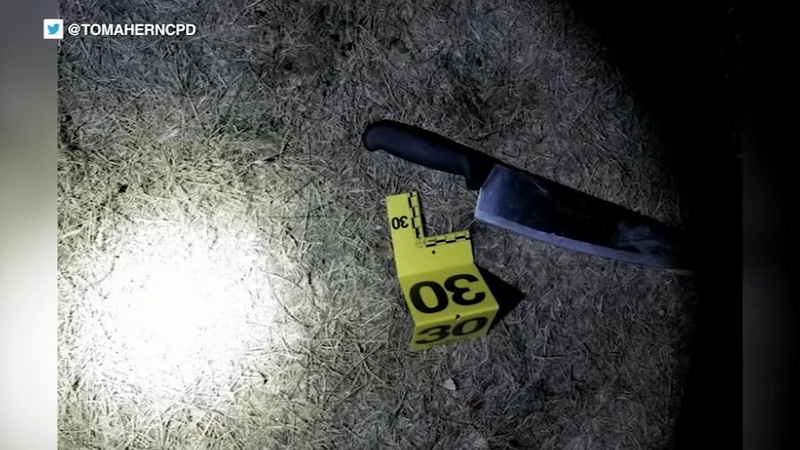 CHICAGO (WLS) -- Chicago police shot and killed a man in Vittum Park after he allegedly lunged at police with a large butcher knife in the city's Garfield Ridge neighborhood on the Southwest Side.

Officers were responding to a person stabbed around 1:40 a.m. near the park at 4899 S. Lavergne Ave., Chicago police said.

After treating the victim, who was stabbed in the hand, officers searched for the suspect who was located near 49th and Lavergne, according to police.

Preliminary information from the Civilian Office Police Accountability shows officers attempted to apprehend the man, who was still armed with the knife, when a struggle ensued and officers tased him.

The man continued to attack officers with the knife, resulting in two officers discharging their firearms, according to COPA.

The man suffered multiple gunshot wounds to the body and was pronounced dead on the scene a short time later, police said.

The officers were wearing body cameras, according to COPA.

Three officers were taken to the hospital for observation.
Chicago police spokesman Tom Ahern tweeted a photo of the knife, which he said was recovered at the scene.

COPA said its investigators will continue to canvass the area for witnesses, additional video and other evidence.

During a media availability Saturday afternoon, Chicago Police Superintendent David Brown said police found the man who reportedly had a knife in the bushes in the park.

The incident was captured on body camera, he said. And the man with the knife allegedly stabbed a female police sergeant in her vest several times during the struggle.

Officers involved in shootings are typically placed on administrative duties for 30 days while COPA investigates.