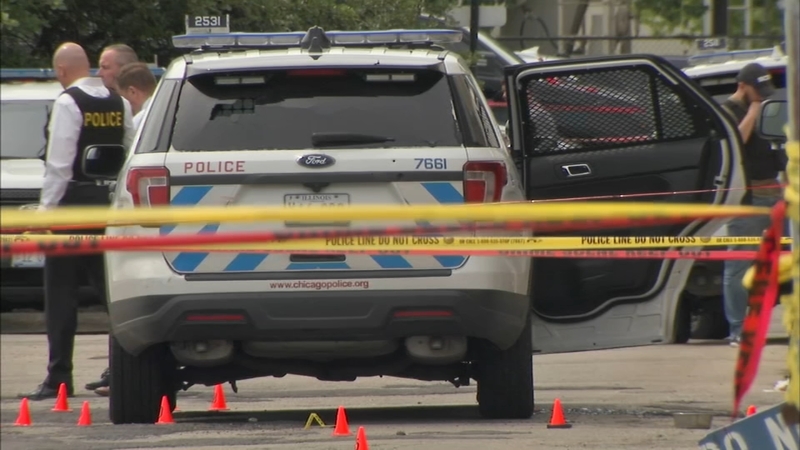 CHICAGO (WLS) -- Lovelle Jordan has been charged with six counts of attempted first degree murder among other felony charges.

The Chicago police officer who was shot in the face yesterday recovering at Illinois Masonic.

Gardiner said he knows the severely injured Chicago police officer from Jefferson Park and that his family has deep roots in the city.

"He's a father of three, he's one of three children himself. His father is a marine and Chicago firefighter. He's a testament to our neighborhood," Gardiner said.

The officer is recovering at Illinois Masonic. As of Friday afternoon he was in stable condition.

The man accused of opening fire on the officer and other police at the the 25th district is in the Stroger Hospital ICU. He was shot in the gun fight at the district and may never walk again.

Lovelle Jordan, 25, was arrested Thursday on the West Side on suspicion of being involved in an armed carjacking.

"It just shows how emboldened these criminals are," Deenihan said. "This guy walks right past the front of the officers car and just jumps in this vehicle trying to start it and drive away when the officers are right there."

Police allege he produced a semi-automatic pistol while being removed from a police vehicle outside the 25th District police station, shot the officer who was attempting to remove him and fire upon other responding officers, striking several others before officers were able to wound and constrain him. Jordan had been arrested as a carjacking suspect, police said.

Chief of Detectives Brendan Deenihan searched Lovelle during the arrest, but they missed a gun concealed in his pants.

Jordan was able to maneuver his hands from back to front while handcuffed, Deenihan said.

When they arrived at the 25th district, police said Jordan opened fire. Three officers were shot, one in the face.

"He's going to make it, and he's giving everybody the thumbs up and he's doing better," Deenihan said.

Police are also investigating as they try to determine how a carjacking suspect who was in custody was able to conceal a gun and fire on the three officers.

Superintendent David Brown said the suspect was wanted in connection with a carjacking downtown on June 26.

"Officers got behind the car. Identified it as that car, from the carjacking vehicle, stopped the car, put the suspect into custody, and the rest transpired after," Brown said.

The gun used by the carjacking suspect has been traced by ATF agents who responded to the scene, agency officials told the I-Team. The weapon will undergo a ballistics comparison to see if it has been used in a previous shooting.

Two more officers were taken to a hospital suffering from chest pain after the incident.
Speaking outside Illinois Masonic Medical Center, Brown asked for prayers for the officers and the whole department.

"I want to strongly emphasize the inherent danger that these and all Chicago police officers experience every day protecting the residents of Chicago," he said. "When they leave home, they leave their loved ones and put these stars on and risk everything, they risk everything protecting all of us."

Mayor Lori Lightfoot chimed in on Twitter, posting, "Today is a searing reminder of the danger our men and women of our Police Department face every day they put on their uniforms and leave their homes. This is the sacrifice they make in order to serve and protect our city and fellow residents."