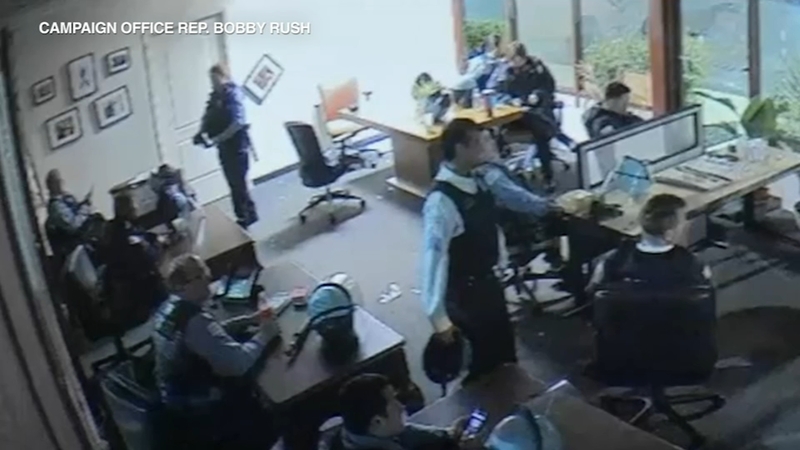 CHICAGO (WLS) -- US Congressman Bobby Rush said more than a dozen Chicago police officers were "relaxing" in his campaign office while nearby areas were being looted.

The incident occurred at his office at 54th Street and Wentworth Avenue on June 1 before sunrise. Congressman Rush said his office was burglarized and afterward discovered video tape of the officers in his office on their cell phones, relaxing, lounging, relaxing, sleeping and eating.

"They even had the unmitigated gall to make coffee for themselves and to pop popcorn, my popcorn, in my microwave while looters were tearing apart businesses. Within their sight and within their reach," Rush said.

Three supervisors and 10 officers were captured on the video, and spent four or five hours in the office. Though it's unclear if the officers witnessed active looting, steps from the office on the other side of the window are several stores that were pillaged in the strip mall.

A videotape from Congressman Bobby Rush's office shows what the congressman said were police officers "lounging" while looting was going on.

Rush went to the mayor with the video this week. Mayor Lori Lightfoot and Chicago Police Superintendent David Brown said all of them will face disciplinary action.

"These individuals did indeed abandon their responsibilities and their obligation and their oath to serve and protect," Mayor Lightfoot said. "We should all be disgusted."

"This kind of conduct means, if you sleep during a riot, what do you do on a regular shift when there's no riot?" Brown wondered.

Lightfoot said there was a core group of officers in the office and then several others coming in and out. She said at its height, there were 13 officers.

She offered an apology on behalf of the city, saying those officers have done incredible harm, including confirming the perception that many have on the South Side that police simply did not care that minority communities were being looted.

"It is a personal embarrassment to me," Lightfoot said.

"I've been a policeman for 34 years and I've never been as embarrassed as I am right now," said Chief of Patrol Fred Waller.

Chicago police union leader, John Catanzara, tells the I-Team officers were deployed to Congressman Bobby Rush's campaign office after a request for protection from Rush's staffers. Catanzara says the officers were told to make themselves at home.

A spokesperson for Congressman Rush says nobody from his staff contacted police to ask for the office to be protected.

RELATED: FOP president defends officers shown lounging in Rep. Rush's office
The involvement of three supervisors was even more disturbing to the mayor and superintendent, as it casts doubt on the integrity of police leadership.

"The same time these 13 officers were popping popcorn, taking a nap, relaxing inside this office, I was standing shoulder to shoulder on State Street as we got pounded by rocks from rioters," said First Deputy Supt. Anthony Riccio.

"What makes you comfortable enough that supervisors won't hold you accountable? That means sergeants, lieutenants, commanders, chiefs, deputy chiefs need to step up or step out," Brown said. "I'm not playing."

Chicago police said they have opened an internal investigation into the incident at the request of Supt. Rush. The Civilian Office of Police Accountability is also investigating.

Brown and Lightfoot said they are in the process of identifying all 13 CPD officers and supervisors involved. Their identities have not yet been released.

Lightfoot also said that she is pushing for the state to pass a law requiring police officers to be licensed and certified by the state.