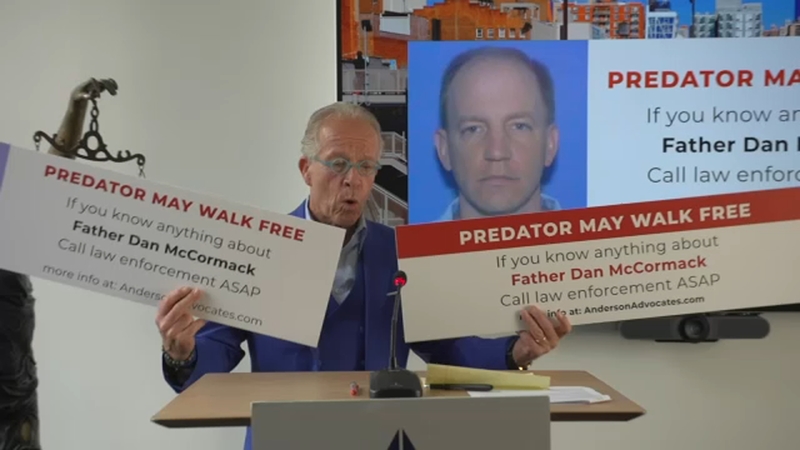 The emotional plea came from survivors of sexual abuse allegedly at the hands of defrocked Chicago priest Daniel McCormack, as they begged prosecutors to keep him behind bars. They're planning a public campaign to encourage more abuse victims to come forward.

"He's already sentenced scores, if not hundreds of kids, to a lifetime of suffering. And we will do everything today to prevent that from happening to others," said attorney Jeff Anderson.

Anderson is imploring prosecutors, and the public, to do what they can to keep convicted child molester and defrocked Chicago priest locked up. Anderson plans to post billboards near the priest's former church on the West Side.

The attorney gathered digitally through zoom with two of McCormack's alleged victims and others to ramp up the public pressure campaign after an appeals court sided with the convicted abuser potentially paving the way for a release.

"The things that I incurred during my time with him, you know, it was, you know, unspeakable. You know, it shouldn't have happened," said one man going by the name JD.

RELATED: Hearing to determine if Chicago priest should remain in sex offender facility

He and another alleged victim, Tariq, who both chose to remain anonymous, said what they endured was unimaginable.

"That type of stuff makes you question your own faith," Tariq said.

The National Director of the Survival Network for those Abused by Priests, David Clohessy, called on Attorney General Kwame Raoul to appeal the case.

"Children are vulnerable if Dan McCormack gets out of prison, and the best way to stop that is for every single person who saw, suspected, or suffered these crimes to call law enforcement," Clohessy said.

Clohessy also called on Cardinal Blase Cupich to use the church's resources to help in this case.

Chicago Criminal Defense Attorney Matthew Hickey, who does not represent McCormack, said this is a case where, "the rights of the worst among us need to be protected so that the innocent are also protected."

He said the appellate court ruled the state failed to meet its burden to prove McCormack is a danger.

"McCormack served his time [and] has been held beyond his sentence, and we don't punish future crimes in the U.S.," Hickey said.

ABC 7 reached out to Attorney General Kwame Raoul's office but did not receive a response at the time of this posting.

McCormack was a basketball coach at St. Agatha's Parish on Chicago's West Side.

He was removed from the priesthood in 2007 and sentenced to five years in prison for other child sex abuse charges.