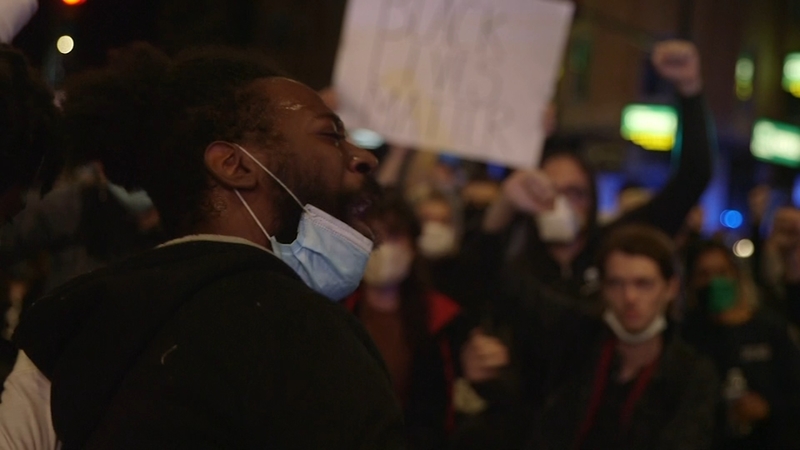 CHICAGO (WLS) -- Peaceful protesters marched through Logan Square and Wicker Park in Chicago on Sunday night for hours beyond the 9 p.m. curfew imposed in the aftermath of the police killing of George Floyd in Minneapolis.

The march moved east along Fullerton Ave. before turning southeast toward downtown on Milwaukee Ave. Marchers turned back west once Milwaukee hit the intersection of Division and Ashland Ave.

About five police officers on bikes and five more on foot moved alongside the protest in small groups. Other police in cars stayed a block ahead of the protest, directing traffic to move out of the way.

The march had no formal organizer, and at times nearly dissipated as some protesters diverged into side streets. But every few minutes another protester would start a chant of "Black Lives Matter," or "I can't breathe," or "Say His Name: George Floyd."

Peaceful marchers passed by some of the storefronts that were destroyed when Saturday night devolved into violence and vandalism. Multiple police officers at the scene said that they believed most of that looting was done by groups driving through neighborhoods in vans and trucks.

Some store owners stood outside of their boarded-up buildings, and people shouted down from apartment windows to join the chants.

At around 11:30 p.m., at the intersection of California and Milwaukee Ave., Humboldt Park resident Andre Williams began speaking to the mostly white crowd of protesters.

"We gotta tell the truth and stop lying. All of these white voices oversee my black voice any day," Williams said.

"A lot of you look young... Until the moment comes when we can talk to your parents and your parents know that black lives do matter - until that becomes a factor in the white household - change will not come," he said.

Williams said he joined the march as it passed his home on North Ave. He runs a nonprofit organization called the Iwill Foundation, and spends his time working with youth.

At the end of Williams' speech, the crowd all knelt together and raised their fists.

"It's time for us to put away all these things that's going on and to love on each other and to show each other: I won't let you fall, and don't let me fall," Williams said. "As long as I got you, you got me. And we gotta stand by that."

Williams' words were the last of the night. Protesters split up and walked home. Several police cars turned on sirens and sped off to other parts of the city.