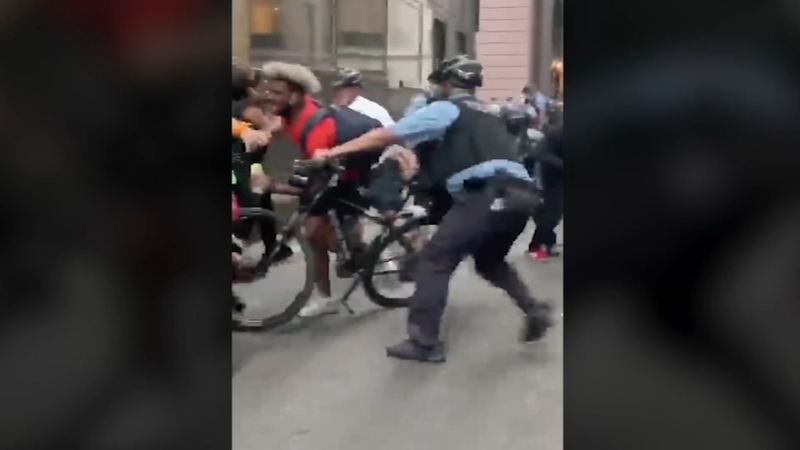 CHICAGO (WLS) -- Those protesting Saturday in Chicago's Loop are demanding accountability from both CPD and Mayor Lori Lightfoot, saying they were not the ones who initiated the violence.

Dozens were arrested and several were hurt, including 17 police officers as protesters clashed with police Saturday in the Loop.

On Sunday morning, CPD tweeted a video of the clash with protesters and said "The following video footage shows the initial incident that sparked yesterday's violence and arrests, as well as the aggravated battery against a CPD officer with a skateboard. More video will be released throughout the day as it is received."

The following video footage shows the initial incident that sparked yesterday's violence and arrests, as well as the aggravated battery against a CPD officer with a skateboard. More video will be released throughout the day as it is received. pic.twitter.com/oW7Z3oGKSZ

In later tweets, police announced that, "Jeremey Johnson, 25, has been charged with felony aggravated battery to a peace officer after repeatedly striking a #ChicagoPolice officer in the head with a skateboard at yesterday's downtown protest."

Jeremey Johnson, 25, has been charged with felony aggravated battery to a peace officer after repeatedly striking a #ChicagoPolice officer in the head with a skateboard at yesterday’s downtown protest. https://t.co/OChnGsGmBd pic.twitter.com/CF4Y6gtCpO

"The officer, who was wearing a protective helmet, sustained minor injuries and was treated at a local hospital. This is just one example of how our #ChicagoPolice officers continually risk their own safety to protect this city and its residents," police said.

Police allege another man lunged into the police line, leading to chaos and arrests, and that water bottles and other objects were thrown at them.

The day of demonstrations against police brutality started peacefully Saturday with a march around noon. Later, a separate demonstration near downtown resulted in two dozen arrests, 17 injured officers and at least two injured protesters. None of the injuries were believed to be life threatening.

Lightfoot told CBS' "Face the Nation" on Sunday that agitators "have embedded themselves in these seemingly peaceful protests and come for a fight" though the clashes were "over very fairly quickly because our police department is resolved to make sure that we protect peaceful protests."

Chicago Police Department Superintendent David Brown said that some in the group used black umbrellas to make it harder for police to see them, pushed officers and assaulted them.

At the same time, activist groups and some elected officials called out police for using aggressive tactics, including spraying the crowd with a chemical irritant and striking protesters with batons.

"The march was peaceful until CPD and other law enforcement agencies began an all-out assault on protesters," said a Sunday statement from youth activist group Increase The Peace.

Youth-led organizers in support of #AbolishICE and #Defund CPS were involved in Saturday's protest, including the Good Kids Mad City movement.

After the violent clash with police, the organizers have demanded an apology from for Chicago Police Department and Lightfoot's office "for violating our rights to peacefully assemble and for their abhorrent attacks on peaceful protestors."

Twenty four people were arrested and at least 17 officers were hurt after protesters clashed with Chicago police Saturday in the Loop.

The group said Chicago police instigated the violence, and claimed undercover officers were embedded with protesters.

"We were outside peacefully protesting, and the police attacked us," Alicia Kamil said. "We were walking away to get to a safe spot, and police pepper sprayed and beat us up and arrested people."

They said demonstrators did not change their appearances, but were prepared for rain and possible pepper spray.

The protesters also insisted they sought to remove agitators from their group to keep the protests peaceful.

"The violence that CPD and law enforcement agencies created, created the atmosphere for that to happen," said Berto Aguayo, of Increase the Peace. "They initiated the attacks and when people are fighting for their lives, people are going to do whatever they can to survive."

Activist Ja'mal Green demanded that if protesters were arrested for violence then CPD officers should be held accountable, too.

Protesters also released their own video from Saturday's melee, which shows Chicago police officers running toward protesters, using a bicycle in what appears to be an attempt to corner them before a man in all black is pulled down, later being beaten with a baton multiple times.

The demonstrator, who wants to remain anonymous, alleged officers were directing their group to disperse but were still blocking them in.

Several Chicago Democrats, including state Sen. Robert Peters, state Rep. Lakesia Collins and Alderman Byron Sigcho-Lopez, questioned using department money on such a response to protesters in a city that has had a lower homicide case clearance rate than other big cities.

"We once again condemn Mayor Lightfoot and Superintendent Brown for their use of police force against these demonstrators on Saturday night, and for the continued escalation of surveillance, violence, and detention of protesters," said a Sunday statement from the group.

Chicago police released additional information about those charged Sunday, including Nicoline Arlet, 24, of Chicago, who reportedly took a bodycam that had been ripped off an officer. She faces a felony theft charge.

Elena Chamorro, 18, of Chicago was also arrested after allegedly battering a uniformed deputy chief of police. She faces a felony aggravated battery charge and a misdemeanor charge of mob action.

Protesters on the ground claimed they were holding a peaceful demonstration.

"We were at Michigan and Wacker; we wanted to go east on Wacker, and then the cops wouldn't let us, and there was a bike barricade with the protesters and the police," protester Womyn Wonder said.

Demonstrators also said some officers threw bikes at them.

Brown said the day began peacefully on the South Side but tensions increased as protesters moved throughout the Loop.

Brown said "agitators" deployed umbrellas, changed their appearance and pushed officers, and police "responded proportionately to get the situation under control."

Brown said police did use pepper spray on the crowd but stressed tear gas was never used.

At least one protester could be seen being taken away in an ambulance.

Another protester said police demanded they empty their belongings and that officers made little to no effort to deescalate the situation.

Several protesters were arrested and at least one was hurt after a clash with Chicago police in the Loop Saturday.

"The cops started grabbing people's umbrellas and ripping them apart and throwing them into the crowd of protesters, and then they started beating people with their batons," Wonder said.

Following the standoff at Michigan and Wacker, the protesters appeared to move back and continued on their march with CPD officers in a line formation following behind.

More clashes then broke out between the two groups.

"Eventually they started descending upon us and marching faster into our rear, and they started beating people at the rear," Wonder said.

Police did not have immediate numbers on how many protesters had been injured.

"I do have a friend whose backpack was stolen by police; although he emptied it out for them to look at everything and they took it anyway," Wonder said. "In my opinion what went wrong was I just think the cops don't know how to deescalate situations. They just bring it to a scary level."

Protesters marching against police brutality head down side streets towards downtown Chicago.

The Chicago Office of Emergency Management and Communication said all streets, bridges and CTA stops downtown Chicago would be accessible Sunday night into Monday morning. Travel restrictions were put in place after pervasive looting earlier this week.