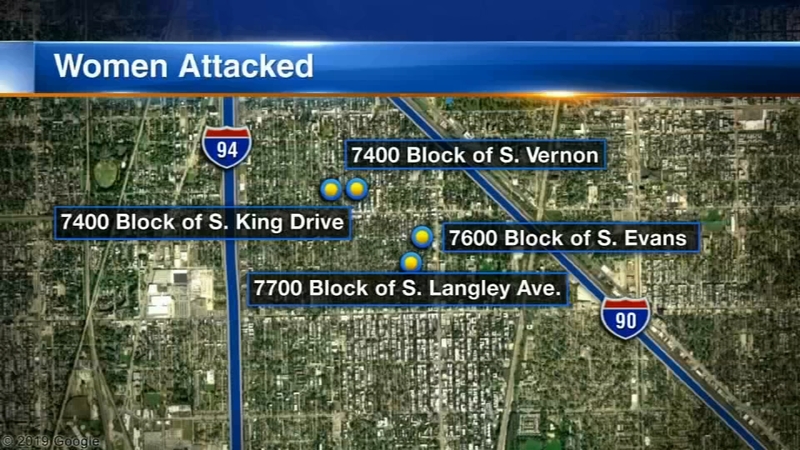 CHICAGO (WLS) -- Chicago police are searching for a possible serial rapist on the South Side and neighbors in the area are on alert.

Police believe the same suspect may be responsible for sex assaults on four women in the last two months in the city's Chatham and Greater Grand Crossing neighborhoods.

"You can be walking past him every single day and don't even know it, that's very scary," said Rose Martin, resident.

Chicago police are searching for a possible serial rapist on the South Side and neighbors in the area are on alert.

The victims were all young women between the ages of 19 and 25, police said, and all of them were robbed of their cell phones, cash and other personal belongings.

Investigators have not said how the suspect lures the women into a secluded area to victimize them.

"There was some conversation between the victim and offender," said Lt. Ozzie Valdez, acting area central commander.

For neighbors, enough is enough.

The attacks hit a little too close to home for 6th Ward Alderman Roderick Sawyer.

"We want to make sure that we capture this person and bring him to justice so that people can continue to feel safe walking the neighborhood," Sawyer said.

Police only have a vague description of the attacker, but say he was last seen near 67th Street and Prairie Avenue.

"You can be walking past him every single day and don't even know it, so that's very scary and very frustrating, so I am hoping they get him and catch him and it stops," said resident Rose Martin.