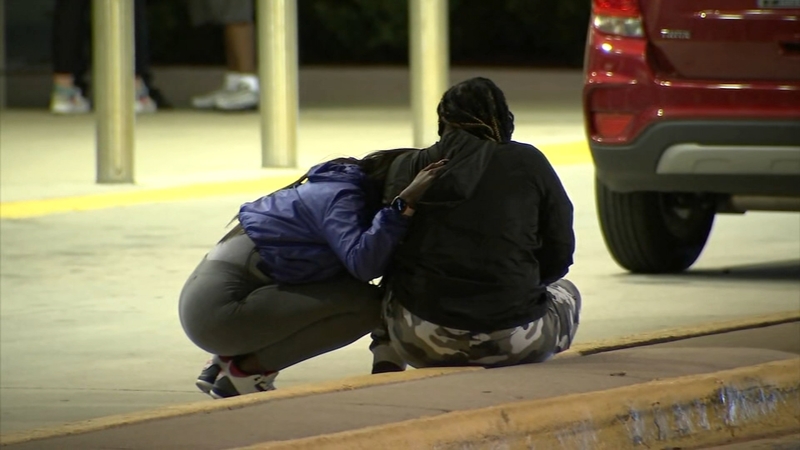 CHICAGO (WLS) -- An 8-year-old girl was killed Monday evening when someone fired shots into the SUV she was riding in on Chicago's South Side, police said.

The girl and three adults were sitting in a Subaru SUV at the stop light on Union Avenue at West 47th Street when police say the gunman's car intentionally pulled up behind them, targeting someone inside.

A child is among three people shot in the Canaryville neighborhood on Chicago's South Side.

The girl and two adults inside the SUV suffered gunshot wounds, police said.

"The victims' vehicle continued northbound on Union and crashed into a tree," McDermott said.

The 8-year-old girl was taken to University of Chicago Comer Children's Hospital, where she was pronounced dead. Her name has not yet been released.

Chicago police investigate after a shooting that left an 8-year-old girl dead and three others injured in the Canaryville neighborhood.

"I stand here before you saddened and angered that another child has lost their life to senseless gun violence in the city of Chicago," McDermott said.

While witnesses said people nearby tried to save the little girl's life with CPR, police say the gunman made a U-turn and fled soutbound on Union in a black, newer-model Dodge.

A 30-year-old woman and a 31-year-old man were taken to University of Chicago Medical Center in serious condition. Both were shot in the back, police said.

Another 30-year-old woman in the vehicle was also injured, but police said it was unclear whether she was shot or injured by broken glass. She is in good condition at University of Chicago Medical Center, police said.

At the crime scene, police pointed out on more than one occasion that they, too, are emotionally exhausted by the rate of gun violence in the city, particularly this summer.

In the meantime, no one is in custody. Area One detectives continue to investigate.