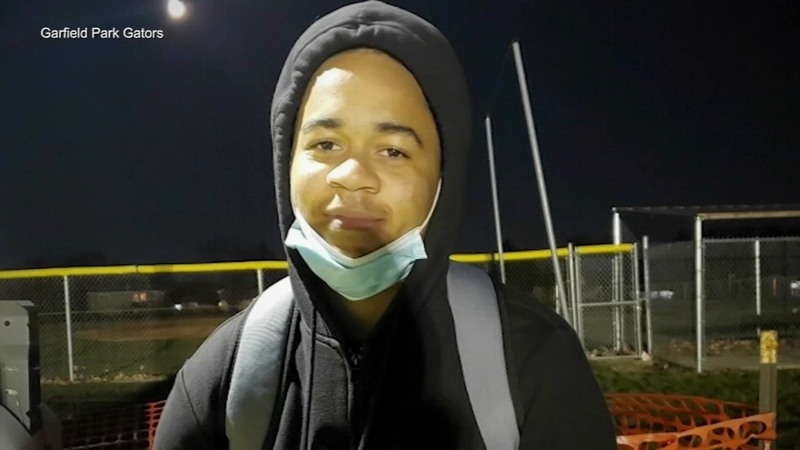 Man charged with Noble Square murder of teen tried to rob him: prosecutors

Tremell D. Neloms has been charged with first-degree murder in the death of Chicago high school freshman Caleb Westbrooks.

Prosecutors said Thursday that Neloms, a student at neighboring Golder College Prep, killed Westbrooks while attempting to rob him.

Westbrooks had left Rauner College Prep after early dismissal at 12:15 p.m. on Jan. 18 and walked with friends two blocks north to meet other friends at Golder College Prep, prosecutors said.

The teen was shot and killed while walking to catch a bus in Noble Square.

While Westbrooks' group waited outside for the friends, Neloms left the school and passed through them, prosecutors said. Neloms allegedly followed them after the friends arrived and they began walking down Superior Street.

After some in Westbrooks' group looked back at Neloms, he walked through the group again and turned on Chicago Avenue, prosecutors said.

Neloms then approached Westbrooks at the mouth of an alley in the 800 block of North Greenview Avenue, prosecutors said. After Westbrooks asked him a question, Neloms allegedly pulled out a gun and said he was robbing them.

When Westbrooks asked who he was robbing, Neloms allegedly fired three times, striking the teen in the abdomen, chest and arm. As Westbrooks' friends ran, Neloms fired at them four times and then ran back to his school, prosecutors said.

Neloms was arrested by members of the Chicago Police Department and the Great Lakes Regional Fugitive Task Force on Wednesday in the 500-block of Forsythe Avenue in Calumet City after being identified as the person who fatally shot Westbrooks Jan. 18 in the 800-block of North Greenview Avenue, CPD said.

Cook County Crime Stoppers was offering a reward of up to $15,000 to help catch the person who murdered Westbrooks.

Detectives used surveillance video at Golder College Prep and private cameras to follow Neloms through the entire incident. Neloms was allegedly captured arriving to school late that morning. He was buzzed in by an administrative assistant who later identified him in surveillance video, prosecutors said. One of Westbrooks' friends also allegedly identified Neloms in a photo array.

He was ordered held without bail.

In a statement, Caleb's father said while the arrest is "good news, it "doesn't bring Caleb back to me, his mother, his sister, his grandmother, uncles, cousins and scores of friends."

At an impromptu vigil, his classmates at Rauner College Prep remembered Westbrooks as a light that shined bright.

"All day today at Rauner College Prep, everyone has been crying. It's been emotional. He's like our missing piece," said student Ahmani Paskel Dobine.
"He was literally the school joy. He never had a frown on his face; he was literally always smiling," added student Jayden Strzelczyk.

Westbrooks' family has described him as a "smart, vivacious and athletic teenager."