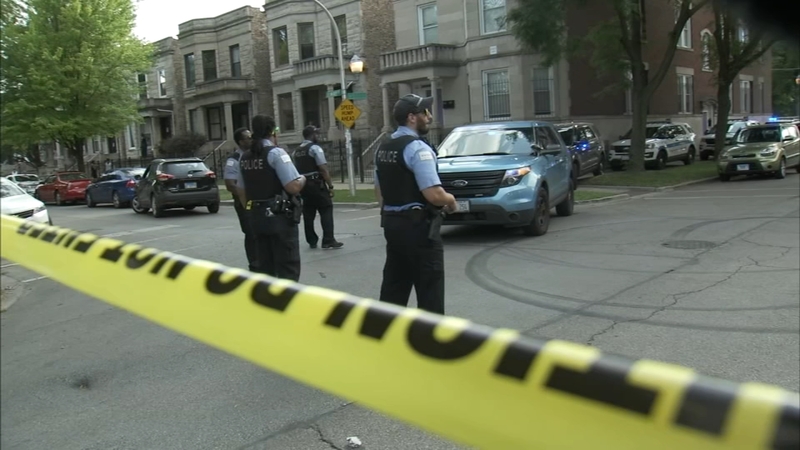 CHICAGO (WLS) -- One person was hospitalized Sunday after shots were exchanged between Chicago police and an individual in Englewood.

Police responded about 2:30 p.m. to the 5700-block of South Racine Avenue for a report of a person with a gun. When officers arrived, they found a young male suspect who matched the description given, police said. He appeared to be in his late teens or early 20s.

Police tried to confront him in a nearby alley, but he reportedly ran from officers, pulled out a gun and began shooting at them.

"They confronted him. He fled on foot. Short foot pursuit," Deputy Chief Yolanda Talley said. "During the foot pursuit, the offender turned and fired shots at the officers. The officers then returned, discharging their weapons."

Several officers shot at the individual, hitting him, police said.

The suspect is in custody at University of Chicago Hospital. Chicago fire officials said his condition was not known.

A person was hospitalized Sunday afternoon after a Chicago police-involved shooting in Englewood.

The Chicago Civilian Office of Police Accountability said its investigators responded to the incident, as well.

Offender’s firearm recovered by police after firing at Officers. Officers returned fire striking the offender. Offender transported to U of C Hospital. pic.twitter.com/UQPmfP3a35

No officers were hurt in the shooting, but three were taken to Little Company of Mary Hospital, likely for evaluation, fire officials said. The officers involved will be placed on routine administrative duties for 30 days, police said.

About an hour later, residents confronted officers near the scene of the shooting. One officer was taken to Christ Medical Center in Oak Lawn with an injured shoulder, while six more were treated on the scene or declined medical treatment, fire officials said.

"This right here is a direct response to one agitator being on the scene, getting people all worked up without having the full story," Talley said. "Very hostile. Emotions were running high."

One officer was "maced," and a brick was thrown through the window of squad car.

Police said the crowd was agitated over misinformation over the young man who was shot and allegations of a missing cell phone.

Two people were arrested in connection with the later altercation, she said.

Chicago police are asking the community to take a step back and to work with them.

"We want to listen to them, but we want them to listen to us, too," Talley said. "But right now, in this climate, everyone is feeling a certain type of way about the police, and it is really unfair to us; it really is."