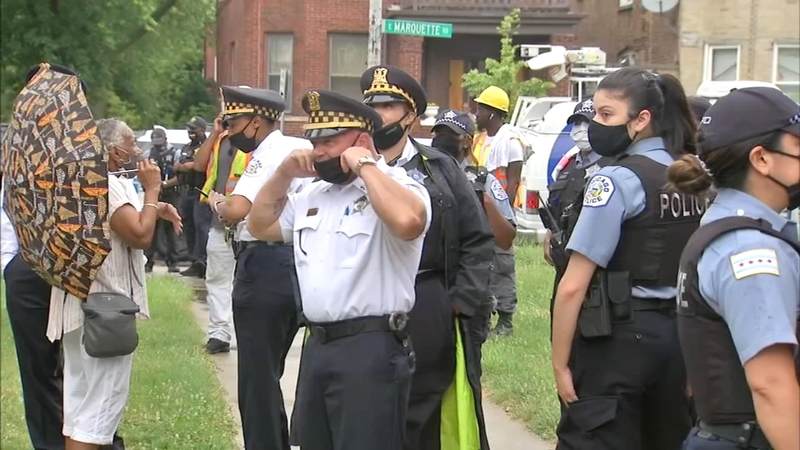 CHICAGO (WLS) -- As the call for more community policing grows, the Chicago Police Department is launching an effort to build trust and cut down on crime.

Police are gearing up for the weekend, hoping to keep a lid on the violence that has marred the past three weekends.

On Friday, the department added dozens of officers to a mobile patrol unit to better respond to hot spots, while trying to build community relationships.

Brown said the unit that patrols parks, beaches and neighborhoods will now also participate in community service projects every week across the city's neighborhoods as part of the effort to tackle crime and the root of it.

As the call for more community policing grows, the Chicago Police Department says it wants to build on that.

On Friday morning, members of the summer mobile unit joined other city service representatives to help clean up a neighborhood in Woodlawn.

Police went door to door to pass out fliers and make connections with the community.

"These officers will participate in community service projects once a week in different neighborhoods across the city. This is all part of effort to build relationships and build trust between officers and the residents that we serve," said Chicago Police Superintendent David Brown.

Sixty-six officers are being added to the summer mobile patrol unit, bringing their ranks to more than 200 for this weekend. The focus is on guns, gangs and hotspots.

"So we will be deploying our resources around historical data, where violence has occurred the last few weekends and historically over the last couple years, but we will be partnering with the community," Brown said.

After three straight weekends with dozens of shootings and murders, a new citywide mobile unit announced earlier this week is still not ready to hit the streets.

Still, Parkway Garden Christian Church Pastor Edward Morris has seen the results of a concerted effort by Third District officers to connect with residents. Morris said he's hopeful it will lead to better understanding on both sides.

"But if they're going to really serve and protect, they've got to get to the point of really serving," Morris said. "And the only way to do that is to build relationships."

The pastor added, "I think the people need to learn that policemen are human beings."

Last weekend, police deployed an extra 1,200 officers because of the July 4th holiday.

"July 4th, we had 17 deaths in Chicago. Seventeen deaths and one child. That doesn't make any sense. We can do better if we all work together," said Block Club Beat Facilitator Charles Brinson.

"We will be deploying our resources around historical data where violence has occurred the last few weekends and historically over the last several years but we also will be patterning with the community," Brown said.

This weekend, police are back to normal staffing levels, supplemented by the summer patrol unit.

The unit traditionally focuses on beaches and parks, but with the beaches still closed, the unit is now able to provide more community support.
"We're in a time where we don't have the luxury of not working together. And so regardless of whether you agree with policy or people, it's time that we work together, it's time not for us to be separate," said Alderman Jeanette Taylor.

"Even if they're on foot, bike, however it is, we need that and we need to stay together," said Denice Morris, a Woodlawn resident.

Police have had similar units in the past, but they were disbanded after allegations of aggressive behavior and corruption.