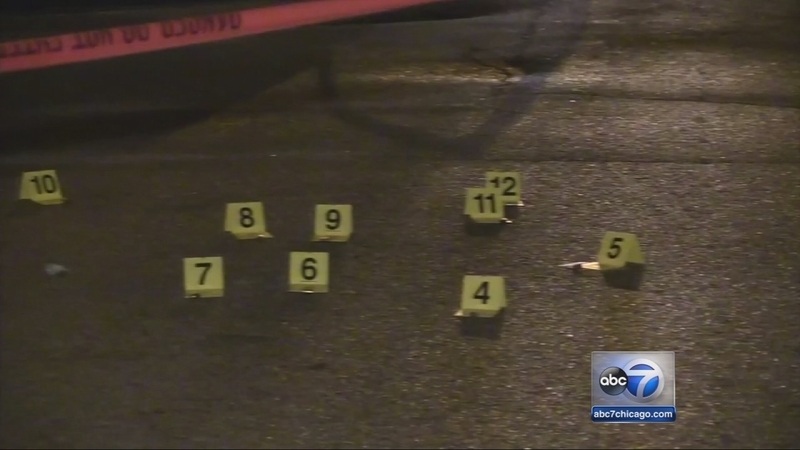 CHICAGO (WLS) -- The police superintendent has spent the weekend - not at police headquarters - but out on the streets.

Superintendent Eddie Johnson says the violence has to do with "too many guns and too many people willing to use them."

That may be the reason for an unofficial tally that includes five people killed and 55 others hurt in shootings from 12:01 a.m. Friday until around 6:30 a.m. Monday.

Those numbers do not include three highway shootings under Illinois State Police jurisdiction.

To break those numbers down: Last year over the Memorial Day weekend there were 48 shootings and 14 homicides were recorded.

The year before there were 26 shootings and seven murders.

The department said the official numbers come out Tuesday and they do not have any scheduled updates Monday.

"I've been out in several communities since Friday, and I do feel that positive vibe from that. So it is encouraging, but there's still a lot more work to be done," Johnson said.

The superintendent says "any amount of violence is unacceptable." He said he will remain visible on the streets but says he needs some help, especially from parents.

Garvin Whitmore, 27, was sitting in the driver seat of a vehicle with 26-year-old Ashley Harrison about 5:20 p.m. in the 200 block of West Root when someone walked up to the vehicle and shot the man in the head, according to Chicago Police and the Cook County medical examiner's office.

The latest nonfatal shootings happened early Monday on the South and West sides.

About 1:30 a.m., two 18-year-old men were on a sidewalk in the 1300 block of North Pulaski in Humboldt Park when someone walked up and started shooting, hitting one man in the back and the other in the leg, police said. They were both taken to Stroger Hospital, where their conditions were stabilized.

About 1 a.m., two people walked up to a 28-year-old man in Park Manor's 400 block of East 74th Street, flashed a gun and demanded his things, police said. The man ran away, then heard gunfire and realized he'd been shot in the buttocks. His condition was stabilized at Stroger.

About 12:30 a.m., a 35-year-old man was shot in the leg by someone in a silver Trailblazer driving through the 900 block of North Massasoit in the Austin neighborhood, police said. He was taken to Loyola University Medical Center in Maywood, where his condition was stabilized.

At least 43 more people have been wounded in other Chicago shootings since 9:25 p.m. Friday.