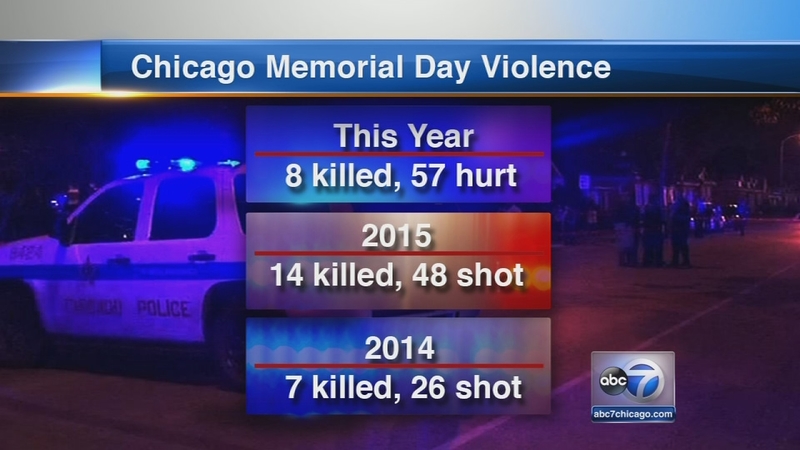 CHICAGO (WLS) -- Eight people were killed, including a 15-year-old girl, and at least 57 more have been wounded in shootings across Chicago over Memorial Day weekend.

The total number of people shot during Memorial Day weekend this year has surpassed 2015, when 55 people were shot, 12 fatally, over the holiday weekend.

"Everybody is thinking they're killers...everybody is in the area trying to protect themselves," said Carl Taylor of East Garfield Park. "There's a lot of violence going on."

Taylor said the sound of gunshots in his neighborhood is so common, he often sleeps through it. Juan Meldonado said his dog still gets rattled.

"My dog gets freaked out once he hears gunshots he runs to the basement; we can't take him out anymore," Meldonado said.

The most recent homicide happened late Monday in the Washington Park neighborhood on the South Side. The 44-year-old man was shot in the chest about 11 p.m. in the 5100 block of South Calumet, Chicago police said. He was taken to a hospital and was later pronounced dead.

The victim, according to police, is a documented gang member. Witnesses are not cooperating with the investigation, police say.

About the same time, a 25-year-old man was shot to death in the West Rogers Park neighborhood on the North Side. He was shot in the neck about 11 p.m. in the 6400 block of North Rockwell, according to police. He was taken to Presence Saint Francis Hospital in Evanston, where he was later pronounced dead.

Garvin Whitmore, 27, was sitting in the driver seat of a vehicle with 26-year-old Ashley Harrison about 5:20 p.m. Saturday in the 200 block of West Root when someone walked up to the vehicle and shot the man in the head, according to police and the medical examiner's office.

A few hours earlier, 15-year-old Veronica Lopez was a passenger in a vehicle with a 28-year-old man in the 2400 block of North Lake Shore Drive when a black Nissan pulled alongside them and someone inside opened fire about 1:30 a.m., authorities said.

The latest nonfatal shooting happened Monday night in the South Shore neighborhood on the South Side.

A 24-year-old man was shot in the arm and leg about 9:30 p.m. in the 1500 block of East 73rd Place, police said. He was taken to Stroger Hospital, where his condition stabilized.

A 17-year-old boy was walking in the 3600 block of West 30th Street in Little Village about 5:26 p.m. when another male on the other side of the street shot him in the hand, police said. He was taken to St. Anthony Hospital in good condition.

Minutes before 5 p.m., a 16-year-old boy was standing on the sidewalk in the 8700 block of South Escanaba when another male walked out of a gangway and shot him in the leg, police said.
He was taken to Christ Medical Center, where his condition stabilized, police said.

A 15-year-old boy was in the 6700 block of South Sangamon about 3:55 p.m. when he heard gunshots and felt pain, police said. He was taken to Christ Medical Center with a gunshot wound to his back. His condition had stabilized.

At least 51 more people have been wounded in other Chicago shootings since 9:25 p.m. Friday.