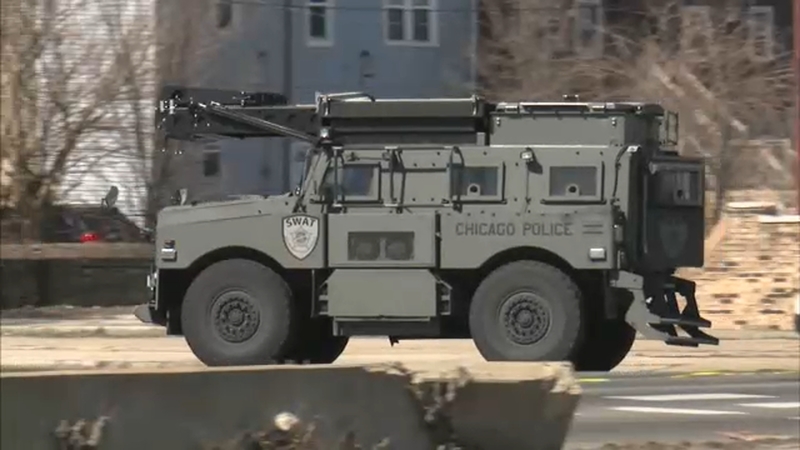 CHICAGO (WLS) -- A suspect has been charged with five counts of attempted murder in connection with the shooting of a Chicago police officer on Saturday, according to Chicago Police Department Supt. David Brown.

Tracey Thomas Jr., 29, was charged with five felony counts of attempted murder of a peace officer. He was arrested on the 200-block of North La Cross Avenue around 2 p.m. Saturday after shooting at five Chicago police officers and striking one in the hand.

The announcement was made Sunday morning during a press conference at Ald. Matt O'Shea's pancake breakfast that benefits Chicago Police Department officers getting new bulletproof vests. Brown emphasized the importance of the vests.

Overall, Brown said 20 officers have been shot or shot at in 2021 following Saturday's shooting.

An hours-long siege followed the officer's shooting on Chicago's West Side Saturday. It came to a peaceful end after the alleged gunman was taken into custody by the CPD SWAT team Saturday.

"We did make contact with this individual inside, he just recently surrendered without incident to our officers' great work by SWAT and our negotiators," said CPD Supt. David Brown.

It began around 11:30 a.m. in the Austin neighborhood as police responded to a report of shots fired in the 100-block of N. La Crosse, according to police.

Chicago Police Supt. David Brown gave an update on a officer shot near Lake and LaCrosse on the city's West Side Saturday.

It was after officers arrived and began investigating that someone shot at them, police said.

"I was taking my dog out in the backyard. All of a sudden I heard these shots back here," described a witness. "I took my dog in the house and I ran to the front door and saw all the police cars."

The witness said they could see officers firing back at the suspect from their elevated first-floor apartment.

Officers did not hit the suspect, who then barricaded himself in a building in the area.

Investigators said during that second barrage of gunfire, a female officer was shot in the hand.

SWAT team was called to the scene where a Chicago police officer was shot Saturday morning in the 100 block of North La Crosse Avenue on the West Side.

She was rushed to Mount Sinai Hospital in a police car with what is considered a non-life-threatening wound and was released a couple of hours later, officials said.

SWAT was soon called in, bringing heavily armed police to the scene.

They first established a perimeter around the three flat building where the gunman was believed to be hiding before getting in contact with the suspected shooter through one of their hostage negotiators.

"We evacuated the house and are interviewing all the people who were in there. Some were just innocent bystanders at home. But we have yet to confirm other people who may have been involved," Brown said.

A gun was recovered following the arrest, according to police.

Offender’s gun recovered at the time of his arrest. #ChicagoPolice pic.twitter.com/wCl1BO1rUW

Another officer was taken to the hospital to be checked out for another medical incident according to Brown.

Brown said the officers will not be identified until families are notified.

"This really highlights the dangers but it also highlights the bravery, dedication and commitment officers have in really running towards danger to protect the people of Chicago," said Brown.

I am proud of our SWAT team members and officers who resolved a critical incident peacefully with the surrender of the suspect and a firearm recovered. This incident highlights the courage, bravery and dedication of our officers who run towards danger every day. #ChicagoPolice pic.twitter.com/xC3By4Y4z8

This is the third time in less than a week a where a police officer has been injured by gunfire. The first came on Sunday when an on-duty sergeant was shot standing in the parking lot outside the Gresham District Police station. A day later, an off-duty officer was ambushed by two men while sitting in his vehicle at a traffic light in Calumet Heights. No arrests have been made in either of those cases.