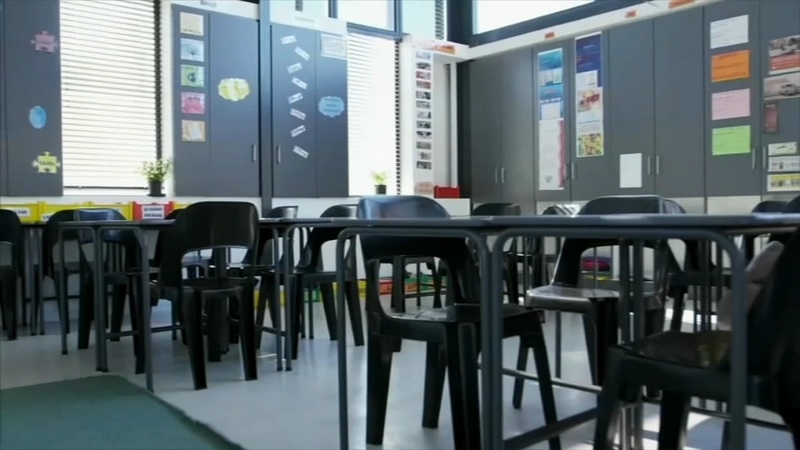 CHICAGO (WLS) -- While there is still no deal between Chicago Public Schools and the Chicago Teachers Union, both sides said they made progress at the bargaining table Monday.

CPS students will continue virtual learning on Tuesday and Wednesday after the district called for a "48-hour cooling off period." And as a result, the district said educators would not be locked out of their computers.

"We don't want a lock-out. We want to keep working remotely as we bargain an agreement to return to our classrooms safely," CTU President Jesse Sharkey said in a statement Monday. "And we're one step closer to that goal today, because management has agreed to stay at the table rather than escalating conflict or locking out educators."

In previous days, there were signs the conflict had been escalating, but it now seems like negotiations are heading in a more positive direction.

Labor attorney Peter Andjelkovich said it seems like there could be more to it.

"However, it also raises a suspicion that a third party is involved, a mediator, could be a public official, local, county, state, federal official, that is aware of both parties, try to get them together to get this resolved," he said.

On CNN Tuesday, Mayor Lori Lightfoot said she wants to bridge the divide and lower the temperature. She also remains optimistic a deal can be done.

"Remote learning is just not working for too many of our kids, particularly our Black and brown students," she said.

The stand-off is even getting President Joe Biden's attention.

"He trusts the mayor and the unions to work this out," White House Press Secretary Jen Psaki said. "They are both prioritizing the health of kids and students"

Despite insisting that teachers show up for work in person Monday, most school buildings remained mostly empty. Around 60,000 kindergarten through eighth grade students were scheduled to return to class, but the stalemate between the teacher's union and CPS forced a delay.

"There's an opportunity here to have a win-win; she (Lightfoot) didn't have to lock out the teachers yesterday, especially since negotiations seem to be going well. People may be saying to her cool out; let's take a few more days, we're making progress. Let's not throw the baby out the bathwater," political analyst Laura Washington said. "She may be listening to that advice."

Both sides did not meet Sunday. The reason why is unclear.

CPS teachers are scheduled to begin getting the COVID-19 vaccine this month.

There is still no deal between Chicago Public Schools and the Chicago Teachers Union as of Sunday evening.

"I know that the CTU wants desperately to be able to return to in-person learning, and they want desperately to do it in a way that's safe," said Dan Montgomery, president of the Illinois Federation of Teachers.

Some CPS parents who have gotten frustrated with the process started a movement asking students to call in sick Monday.

"Parents are tired of being caught in the middle," parent organizer Joseph Williams said. "We feel like we are ignored by CPS and our children are being used as bargaining chips."

Around CPS 1,000 families participated in the "sick out" on Monday, organizers said.

Another group of parents is prepared to file lawsuit against the teachers if they walk out, calling it an illegal strike.

"So we're looking for a court order that orders them to return to work and that's what our parents, our clients are looking for is to get schools open again," said Daniel Suhr, with the Liberty Justice Center.

Two parents who spoke with ABC7 Monday night had different opinions on whether or not students should go back to in-person learning. But both agreed and hope this two-day period will allow for compromise to fit both of their needs.

The Rev. David Griggs and Monica Espinoza represent the two sides in the debate over in-person learning.

"The children in Chicago need to be back in the building and back on the course of learning," Griggs said.

Espinoza thinks the opposite.

"We need to stay remote. It's for our own safety," Espinoza said.

And both understand the challenges of the two communities CPS largely serves.

RELATED: Remote learning: What are the long-term effects of missing classroom time? Experts weigh in

"A lot of our families, they live in in multi-generational homes," Espinoza said. "They have family that suffer from chronic illnesses."

Meanwhile, Griggs is concerned about the quality of current education

"This is becoming a gap of learning, of access, and a continuation of the educational journey," Griggs said.

Despite their differences, they hope the negotiation progress will lead to a solution to fit both their needs.

"Parents should have that decision, so do the teachers, if they want to stay remote and do what's best for their kids and their families," Espinoza said.

Griggs thinks the return to in-person is taking too long.

"It's important that children are protected and that there's no rush to return," Griggs said. "But let's be honest, it's been nine months now and many things have been prepared and put in place to ensure that the children are learning safely."

Full statement from Mayor Lori Lightfoot and CPS CEO Dr. Janice K. Jackson:
We have reached another important milestone today in our efforts to provide in-person learning for our students in the Chicago Public Schools system. We have secured agreement on one other open issue and made substantial progress on a framework that we hope will address the remaining issues. We are calling for a 48-hour cooling off period that will hopefully lead to a final resolution on all open issues. As a result of the progress we have made, and as a gesture of good faith, for now, teachers will retain access to their Google Suite. Students will remain virtual Tuesday and Wednesday and we will update the CPS school community as there are further developments.

Full statement from Chicago Teacher's Union President Jesse Sharkey
"The mayor and CPS have announced a "two-day cooling off period" and said they'll continue bargaining Tuesday and Wednesday, as our members continue to teach and work remotely. We continue to teach because of our members' unity, their commitment to their school communities, and their fearless solidarity. Our members' resolve on the ground allowed us to make real progress at the bargaining table today on a number of the most difficult issues of this negotiation. None of this is easy. The uncertainty and risk our educators, our students and our families confront all take a toll. And all of the progress we've made to date in winning real gains at the table is possible because of the tireless work and dedication of our rank and file members, our delegates, our parents, our allies, and ordinary Chicagoans who trust us to do what's right by our schoolchildren. We don't want a lock-out. We want to keep working remotely as we bargain an agreement to return to our classrooms safely. And we're one step closer to that goal today, because management has agreed to stay at the table rather than escalating conflict or locking out educators. Parents, the public and the press all know that we are willing to keep teaching AND keep negotiating. This move to resolve our differences at the table, at least for the next two days, ensures that our rank and file members can continue to educate the overwhelming majority of Black and Latinx students who continue to choose remote learning while we work on landing an agreement to return to our classrooms and our school communities SAFELY. Our rank and file educators are setting an example for every school community in the nation that shows the power of unity, solidarity, courage, resolve, and our commitment to the greater good."