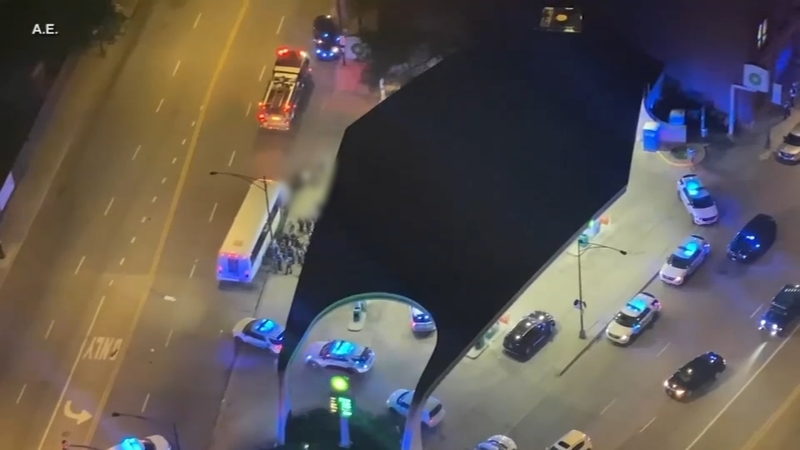 CHICAGO (WLS) -- At least eight people were shot just before midnight Wednesday in Chicago's Old Town neighborhood in what was the third mass shooting for the city in a six-hour span.

The U.S. Justice Department is hoping to deter violence like what happened Wednesday, and on Thursday the DOJ is set to formally launch its gun trafficking strike force initiative in Chicago.

The Old Town drive-by shooting took place outside a BP gas station at Clark and LaSalle streets about 11:57 p.m. Wednesday. Chicago police were just wrapping up the scene about 4:30 a.m.

At least eight people were hurt in the incident, according to CPD. One was an innocent bystander pumping gas.

Chicago police gave an update Thursday on three mass shootings that happened the day before.

Police said over 30 people were traveling on a party bus right by the gas station when someone inside a gray Jeep Grand Cherokee started shooting at them. The car was apparently stolen about two weeks ago.

Two other vehicles were also on the scene, police said.

Police said it's not clear if the victims were inside or outside of the bus when they were shot, but the vehicle had stopped so people could use the restroom and get snacks. The bus windows were shattered by bullets.

Officers said six men and two women were hurt, at least one of them critically. The victims ranged in age from 23 to 52, police said.

A 23-year-old man was struck in the groin and was also taken to Northwestern in serious condition, police said. Two men, 42 and 52, were struck in the leg and taken to Illinois Masonic Hospital, where they were in fair condition.

A 26-year-old woman was shot in the hand and drove to Jackson Park Hospital where she was in good condition, police said.

Lauren Willett heard the shots from her high-rise apartment building across the street.

"It's scary to wake up to that in the middle of the night and hear, you know, noise and people screaming," Willett said.

Second Ward Alderman Brian Hopkins has seen the video from the gas station.

"It appears to be a targeted attack. It looks like the driver of the vehicle and the shooter who is not driving the vehicle knew exactly who they were going after," he said. "They targeted this bus. It's possible they were following the bus."

Police are still looking into a motive. Alderman Hopkins said none of the witnesses are cooperating.

"After a day in the City Council where we spent all of our time talking about how we don't trust the police and here is a situation where the police responded to an active mass shooting within 60 seconds," Hopkins said.

He said the police are not the problem, but illegal guns and gang activity are. He's also calling for a 10 p.m. "operating curfew" on party buses in Chicago. Hopkins said he has already begun drafting the ordinance, which he'll introduce when the city council next meets in September.

The owner of the party bus in which the victims were riding did not comment on the incident. The city's Dept. of Business Affairs and Consumer Protection said it has received one complaint against the bus company for violating COVID-19 regulations in 2020, but no enforcement was issued.

Hours before the Old Town shooting, there were two separate mass shooting in North Lawndale, in which a 14-year-old boy was killed. Nine others were hurt, including four teenagers.

With the Old Town shooting Wednesday night, at least 17 people were shot in three mass shootings in Chicago within a span of six hours.