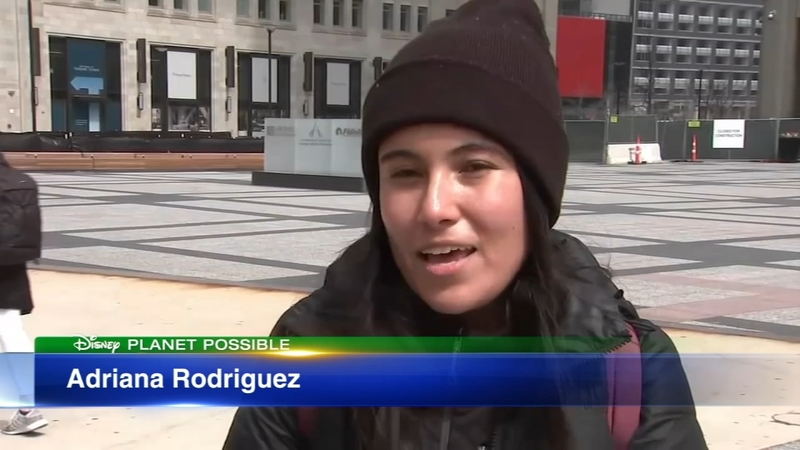 It's historically celebrated to learn more about the environment and the harmful effects of climate change.

All week, ABC7 and Disney Planet Possible are supporting a healthier planet for people and wildlife around the world.

But what about closer to home? Several Chicagoans have concerns about climate change and he affects on our area.

I definitely want to know more about climate change and the biggest changes that are to come within maybe the next 10 years and how it will affect me, as well as everybody else in the city. - Adriana Rodriguez

Answer:
We have already started to see our season change to some degree. Every 10 years, we get a new set of climate normals for Chicago.

The most recent data came out in 2021. It shows every season has seen temperatures rise. Most of that rise is because of warmer nights, not warmer days.

We've also seen an increase in precipitation including more snow in the latest 30-year period compared to the previous data set.

So what we anticipate for winters, are milder temperatures, but more precipitation. That could be in the form of more rain or more snow.

Can what happened in the movie "The Day After Tomorrow" happen in real life today? - Maruwa Thomas

Great question. That was a wild movie. The movie premise involves the collapse of the Atlantic Meridional Overturning Circulation or AMOC. That's a current that transports mild water from the tropics toward Europe and transports colder water deeper in the ocean to the south.

This current is one of the reasons Europe is relatively mild despite it being at a higher latitude.

What the movie gets right is that this current is weakening. Research just released in February says the current is the weakest it has been in 1,000 years.

So what does that mean? It can have consequences on the fishing industry, more violent weather in Europe and also sea level rise along the east coast of the US.

If the current were to collapse completely, which is unknown if that is even possible, it would have really dramatic shifts in the climate, but the effect wouldn't happen in days like the movie.

PLANET POSSIBLE: Get Inspired to Protect Our Planet this Earth Month with Movies and TV Shows from Disney

I enjoy Chicago weather and the four seasons. Does climate change affect our seasons? - Areej Abuzarifa

The weather can change pretty dramatically here in Chicago. The seasons have changed, but not dramatically.

Temperatures here in Illinois have increased 1.5 degrees Fahrenheit since the beginning of the 20th century. And every season has seen a rise in temperatures.

We've also seen an increase in precipitation. The greatest impact has been heavier rain events compared to the past which has increased the flooding risk. And in our city, which is already prone to flooding, that is a problem.

It can seem overwhelming that the problems are so big that how can I make a difference.

There is no dramatic step an individual can do, but if a lot of people make simple changes, it can have an impact.

For me personally, I think of ways to limit my plastic usage, walk or bike more when I can, and reduce my energy usage at home.