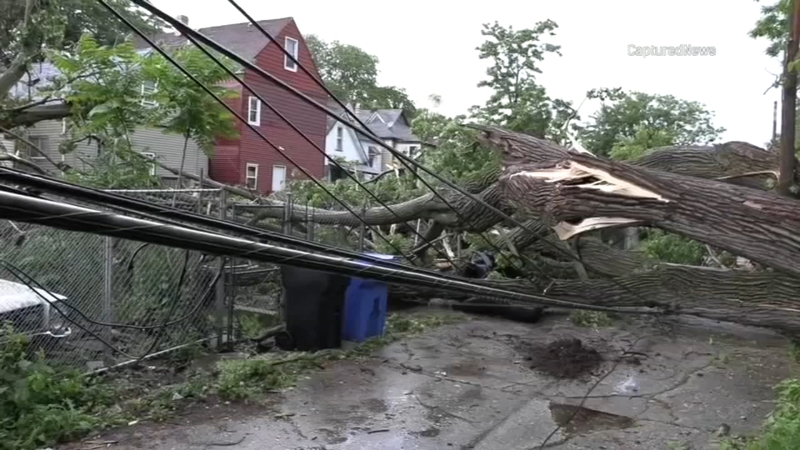 CHICAGO (WLS) -- Thousands were still without power Wednesday afternoon after a line of strong storms raced through the area Tuesday night and Wednesday morning, bringing down trees and power lines with gusting winds.

In Englewood crews are still trying to figure out how to take apart a massive tree that fell and brought down power lines with it. Treeon Hibbler is anxiously awaiting her electricity to be restored; she says it could be a matter of life and death.

"I have medical equipment in my house that requires lights as, due to my heart, I have a heart condition," she explained. "I have a machine that monitors my heart 24 hours a day."

Some people who live in Englewood have been without power for hours after bad weather brought heavy rains and strong winds without warning around 10 a.m.

"Boom, crash, sparks and stuff went down," said Englewood resident Tyaisha Smith. "Oh lord, I thought I was fixin' to lose my life."

The storms left behind plenty of damage, and brought down a huge tree which took out some of a backyard fence, blocked an alley and ripped down power lines, plunging parts of the 7200-block of South Peoria Street and South Sangamon into darkness.

That wasn't the only place the storm left its mark. At 83rd and Pulaski crews were on tree clean up duty, while in south suburban Richton Park some neighborhoods lost power too.

Englewood resident John Rowell said the power outage caused by strong morning storms could cost him more than his comfort.

"I got a refrigerator full of food," he said. "It ain't going to take an overnighter. It might last."

But, he said, it won't last more than a day.

The Tuesday night burst of storms also produced tornado warnings on the South Side, south suburbs and in Northwest Indiana.

Funnel clouds were reported by spotters along the boundary of Will and Lake counties during the warning periods. Downpours and gusty winds were reported widely across the area.

Huge winds as this band came through Palatine! #ILwx pic.twitter.com/H9iwahIZQ2

A trained spotter reported seeing a funnel cloud near Monee in Will County lasting about 10 seconds. Funnel clouds were also photographed in far south Ornaga in Iroquois County.