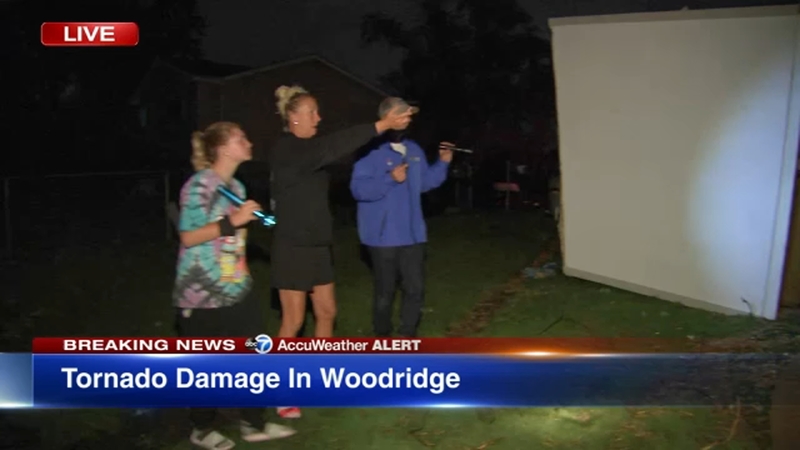 CHICAGO (WLS) -- A tornado touched down in southern DuPage County Sunday night, part of a line of severe storms that brought heavy rains and damaging winds across the Chicago area.

A large tornado was reported in southern DuPage County, both radar-indicated and by local storm spotters around 11:10 p.m. Sunday. The National Weather Service is expected to confirm its strength and path on Monday.

Meteorologist Phil Schwarz said he believes the tornado would likely be rated an EF2 or greater, with winds over 100 mph. He said this is considered a "violent" storm with significant damage to homes and trees.

ABC7 meteorologists predict the tornado was on the ground for 20 to 30 minutes, but again, the National Weather Service will assess the storm and its impact in the coming hours.

The radar-indicated and storm chaser-spotted wedge tornado was on the ground for about 20 minutes in DuPage County, near the southern edge of Naperville, and traveled about 10 to 15 miles west through Woodridge and Burr Ridge before weakening as it got to the area near Justice, Ill., ABC7 meteorologists said.

There have been reports of damage and downed power lines in Woodridge, Darien and toward Burr Ridge, as well as three people injured and gas leaks reported in Naperville.

Tornado touchdown reported in DuPage (1 of 11)

Meteorologist Greg Dutra gets emotional after speaking with Woodridge family after they tour the destruction left behind by the storm.

Police in Woodridge said they were in an all-hands-on-deck situation, but that as of about 12:30 a.m. no serious injuries had been reported. They said so far they are mostly seeing a large amount of structural damage to homes and buildings.

Police are asking people to stay inside and clear of areas where emergency vehicles are working, especially due to the additional risk posed by structural damage, downed trees and downed power lines. The duration of power outages are not yet known. Some small gas leaks were also reported.

There was a confirmed tornado touch down in the @VilofWoodridge. Please stay home and avoid the areas of Janes Avenue, Woodridge Drive, and Woodward Avenue. Those streets may be impassable due to debris and first responder activity. Thank you.

In a rare instance, the ball of debris created by the unconfirmed tornado was visible on radar near the area of I-55 in Burr Ridge.

Much of the Chicago area was under a Tornado Warning Sunday evening. ABC7 Chicago Meteorologist Cheryl Scott breaks down what can be seen on radar

Meteorologist Larry Mowry said it was the most intense tornado this area has seen in a long time, and that the scope of the damage is likely to be great especially due to its wedge shape. Schwartz noted that while northeast Illinois has seen a number of larger tornadoes in the recent past, they've happed in much more rural areas with a lower density of people.

Tips to stay safe during a tornado warning, as well as a look as some of the damage from an unconfirmed tornado in the western suburbs.

While the rotation in the line of severe storms continued to weaken as they continued to travel east, they still brought a deluge of rain and high, damaging winds. Some storm damage was reported in Porter County, Ind., shortly after 12:30 a.m.

Torrential rain in Chicago caused major flooding in the city, with cars trying to navigate through six inches of water at I-55 and Kedzie in Brighton Park. Because the entire Chicago area has been experiencing so much drought, the ground is hard and dry and less able to absorb rain, which contributes to flash flooding conditions.

The line of storms formed along a cold front moving into the Chicago area Sunday afternoon. As a result, the weather the next few days is going to be drastically different than June so far, cool and comfortable as people clean up in the aftermath of this powerful tornado.

As the storms continue to move east, conditions are expected to calm down and dry up, with some winds sticking around Monday.

The storms began crossing the Wisconsin state line about 4 a.m. Friday, and it appeared to be quite the light show in Lake and McHenry counties. The storms progressed across the area and moved through Chicago by about 8 a.m., Butler said.