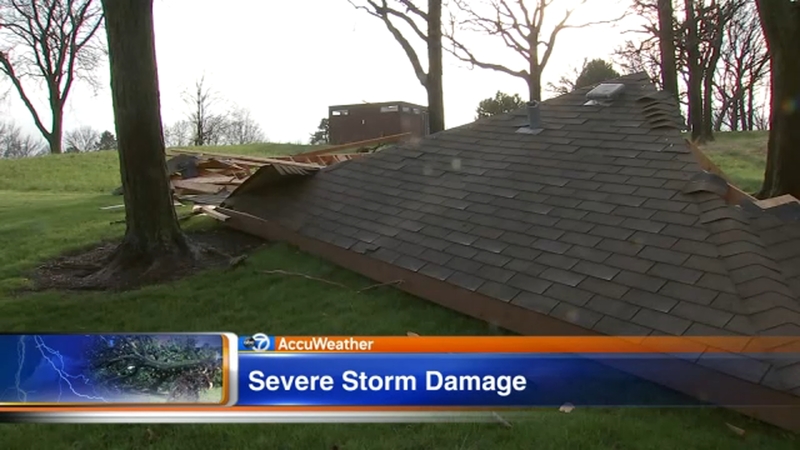 The system prompted several warnings and watching, including a tornado watch for much of the day, which has since expired.

A brief EF-0 tornado reportedly touched down in Oak Brook near the Hilton Hotel and Willow Crest Golf Club around 4:44 p.m., with peak winds upwards of 75 mph and traveled approximately 1.9 miles with a maximum width of 60 yards, according to the National Weather Service. Damage along the path was characterized by snapped tree branches and a few uprooted trees, as well as partial roof loss to an outbuilding, NSW said. The tornado was on the ground for approximately three minutes.

Based on information from local government officials, weather spotters, and radar data, we have confirmed a brief EF-0 tornado in Oak Brook earlier this evening with peak winds of ~75 mph with a path length of ~1.9 miles. #ilwx pic.twitter.com/9xEFhPotd1

The tornado happened just as students from St. Charles East were also arriving at the hotel for their high school prom.

"They were arriving when this started to happen and thank goodness that they stayed in their cars and nobody was injured," said Chief Steve Riley with the Westmont Fire Department.

While 700 students were pulling up for their high school prom, a storm ripped through the Oak Brook area, blowing the roof off an outhouse - which landed nearly 100 feet away.

A tornado-producing storm was also located over Oak Brook, moving northeast at 25 mph around 4:50 p.m., according to the National Weather Service.

"There is debris that flew probably 250 to 300 feet that landed over on the fifth green over here. So the winds had to be pretty strong to rip it off and blow it across the parking lot," Riley said.

Brenda Easter said she and her husband stayed in the basement while the storm passed.

"We just saw a lot of wind. We looked out the window and then our TV was buzzing to get in the basement," she said. "It's kind of scary on how close it was but we felt safe the whole time."

Another brief EF-0 tornado has also been confirmed in Candlewick Lake in northern Boone County around 5:50 p.m., NWS said.

Meanwhile, over in Plainfield, heavy downpour, numerous downed trees and snapped tree limbs, even ripping the siding off one man's home.

"All the siding peeled off the side of the house and the tree across the street came down. There's a couple more up and down the street here. All the shingles are all peeled off the back of the roof," said Ryan Jameson.

Most of the damage has been seen in the western suburbs, however, most other areas saw heavy rain, gusty winds and hail on Saturday.

The system that blew through the Chicago area already hit Kansas on Friday and the images coming out of there are terrifying.
EMBED More News Videos

A powerful tornado leveled dozens of buildings in Kansas. The storm system now moves toward Chicago.

Video shows powerful twisters ripping through the town of Andover, a suburb of Wichita. You can see debris flying and power lines sparking as the funnel rips through everything in its path. Much of the city is now without power. So far, there have been no reports of injuries.

Many folks in the Chicago area are feeling lucky no one was hurt.