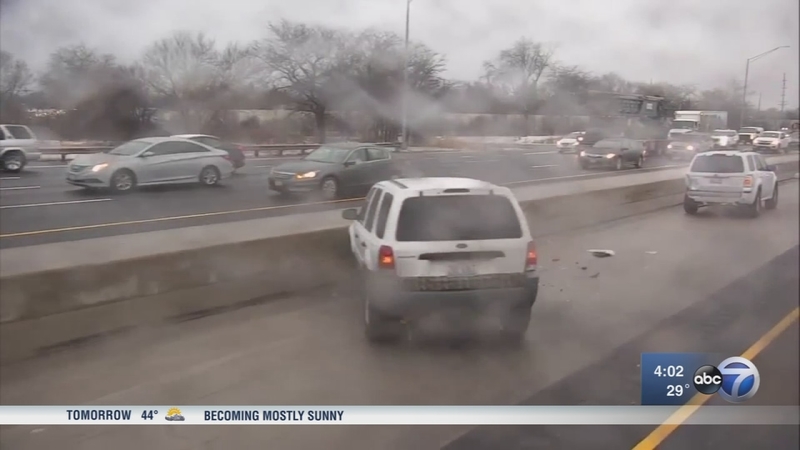 Hundreds of crashes reported due to icy conditions

A Winter Weather Advisory was in effect for Cook, DuPage, Ford, Grundy, Kane, Kankakee, Kendall, Livingston and Will counties in Illinois and Jasper, Lake, Newton and Porter counties in Indiana until noon because of freezing rain creating a light glaze of ice on untreated roads, parking lots and sidewalks.

According to Illinois State Police, at least 135 crashes were reported in Kendall, Grundy and Will counties alone.
EMBED More News Videos

One of the worst crashes was on I-57 near 159th Street, where a 20-car pileup involving a semi was spread out over a quarter of a mile.

On the Stevenson, the ABC7 StormTracker came across more than a dozen accidents, tons of spin outs and several cars in ditches throughout the morning. At least two cars were involved in a crash into a median and traffic was crawling throughout rush hour.

Drivers getting off the Stevenson near Route 53 said the hazardous conditions took them completely by surprise.

"It's gotta be the black ice because on the way here, I saw six accidents four cars in the ditch, so it's bad," said driver Andre Jackson.

"I mean it was bumper to bumper traffic from the accidents and everything," said driver Joseph Esquivel.

Slick roads have caused crashes across the Chicago area, including one on Route 59 in Naperville.

Video of a crash in Naperville Wednesday morning.

"I'm coming from Minooka, get on I-80 and I sat there for 30 minutes and cars were turning around coming off the wrong way and they said there was a three hour delay," said driver Barb Sadowski. "This isn't normal. I was thinking I'm late!"

Meanwhile in Joliet, a multi-car accident at Jefferson Street and Houbolt Road left a few people with minor injuries. Emergency responders also blamed the black ice for the slick roads there.

In DuPage County, more than 80 crashes were reported Wednesday morning.

The Kane County Sheriff's Office says the icy road conditions appear to be a factor in a fatal crash involving a PACE bus and three other vehicles near North Aurora. The crash occurred at about 7 a.m. on Route 31 north of Oak Street.

The driver of one of the vehicles was pronounced dead at the scene, the sheriff's office said. The driver of the bus was hospitalized with minor injuries. No other injuries have been reported.

In Tinley Park, a person died after a semi-tractor trailer came across the median and struck a car on LaGrange Road south of 175th Street at about 5:45 a.m., Tinley Park police said. The driver of the car was pronounced dead at the scene. Authorities have not released the victim's identity.

In the southbound lanes of I-294 near Burr Ridge and Indian Head Park, a pick-up truck lost control onto the right shoulder and struck a semi-trailer. The driver of the pickup truck was transported to LaGrange Hospital where he died from his injuries.

The driver of the truck was not injured and there were no passengers in the car. Police said conditions on the road were icy at the time of the crash.

The icy roads led to all lanes of northbound I-294 between 55th Street and the Stevenson Expressway being closed and a portion of westbound I-80 at Oak Park Avenue in Will County was shut down.

Illinois State Police issued an alert for drivers in Will County to use extreme caution on roadways and they remind drivers to drive at slower speeds and to be prepared for vehicles losing control ahead of or around you.