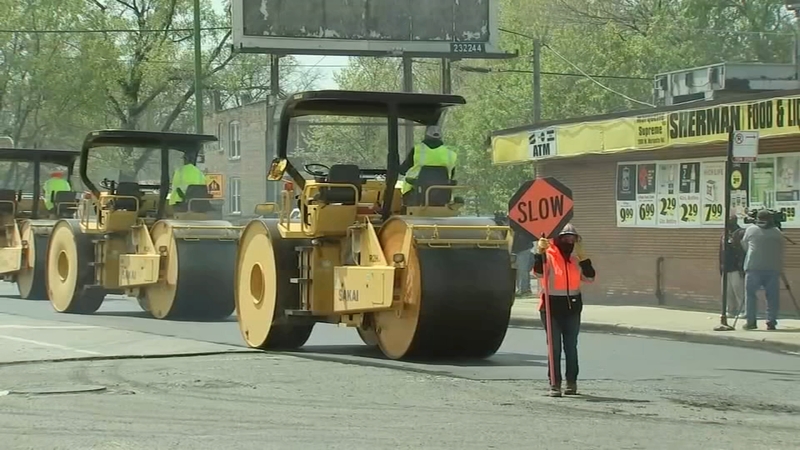 CHICAGO (WLS) -- Road work season has officially kicked off in Chicago, and city officials say this is the start of a multi-year, multi-billion dollar infrastructure improvement plan that will pave the way for new jobs and enhance the quality of life for people in every community.

Mayor Lori Lightfoot visited the Auburn Gresham neighborhood Monday to announce the launch of Chicago Works, which will fund repairs to roads and bridges as well as projects that will beautify neighborhoods across the city.

"Our residents across our city have been asking for more streets and sidewalks to be paving more their streets and traffic lights to work properly, and for their neighborhoods to look more attractive," Lightfoot said.

Within the next two years, CDOT will resurface 75 miles of arterial streets a year, nearly double the miles of a typical year.

"We want to encourage folks to walk, bike, to take public transit. The investment in infrastructure makes that happen," said Gia Biagi, with CDOT.

The city approved the funding for Chicago works as a way to spur economic improvement.

"And that is what this capital plan does. It goes down deep and addresses deferred maintenance that we've been dealing with for all these years and really put people to work," 36th Ward Ald. Gilbert Villegas said.

And filling those jobs will be people from the communities, like Ricky Byrdsong, Jr., a foreman on the repaving project currently underway in Auburn Gresham.

"There's nothing better than putting in hard work and being able to visually see the effects of what we're doing," Byrdsong said.

"The data shows that for every 100 construction workers employed, there's another 226 jobs created that help to support that, so it's that's supply chain that we're also fueling through this work," said Karin Norrington Reeves, The Partnership.