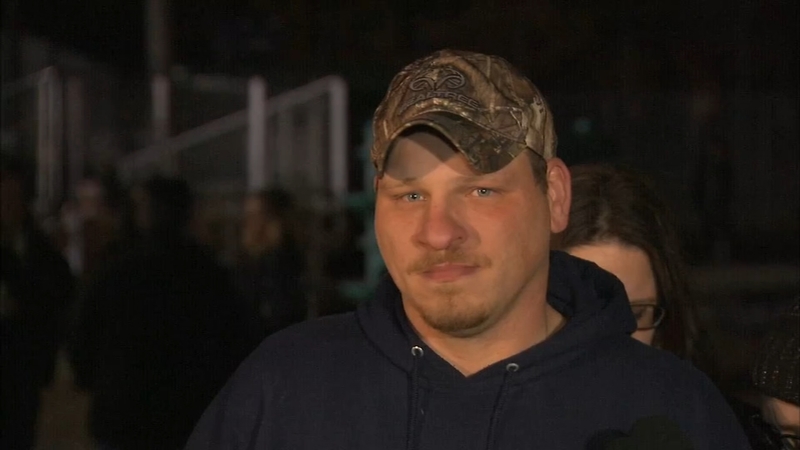 ROCHESTER, Ind. (WLS) -- A vigil was held Friday evening in honor of the three siblings who were struck and killed Tuesday morning as they crossed the street to their school bus in Rochester, Indiana.

Stahl is 9-year-old Alivia Stahl's father. She, along with her 6-year-old twin brothers Xzavier and Mason Ingle, were crossing the street to board their school bus, which had its lights on and caution arm extended, when they were struck and killed by a car.

Alivia tried to shield Xzavier and Mason from the Toyota Tacoma speeding toward them, investigators said. All three were killed instantly.

"Why are people in such a rush to go where they're going not to pay attention to our children?" Stahl wondered.

Stahl and the rest of the tiny community are struggling to understand how the crash happened. Friday night they found a shred of light together.

"I asked God that day, 'Why?' To see the impact our kids have made with everybody out there... that's what the purpose was, that maybe God had intended," he said. "It means their lives weren't taken in vain.

Alivia, Mason and Xzavier have an older sister, who stayed home from school that day for a doctor's appointment.

"She asked me 'Why am I still here? Why did they only take them and not me?' What do you tell an 11-year-old child?" Stahl said.

"We live in a world that's broken, so at some point in time we're going to deal with tragedy, but God never loses," said Pastor Jason Rice, Mentone United Methodist Church.

Organizers said there is no real agenda for the vigil; rather, the event is an opportunity for the community to gather, talk and pray.

"I think people mourn in different ways, and as a community, we are very strong and very tight knit," said vigil organizer Erin Rhodes. "We all love each other, at the end of the day."

"I think it's an opportunity for the community to try to start to heal," said Mike Yazel of the Mentone, Indiana Fire Department.

During a Thursday church service, the mayor of Rochester recounted his conversation with their mother, who said she held her daughter in the street as she took her last breaths.

So far Low has undergone five successful surgeries, is talking and can move all his limbs. Maverik's parents released a statement Friday saying that their son was talking, laughing and joking with his family.

Alyssa Shepherd, 24, is charged with three felony counts of reckless homicide and one misdemeanor count of passing a school bus while its arm is extended, causing injury. She told police she saw the bus's lights but did not realize it was a school bus until the children were right in front of her.
Shepherd also told police she had three children in her backseat when the crash happened. She is the children's director at Faith Outreach - A Foursquare Gospel Church nearby in Rochester.