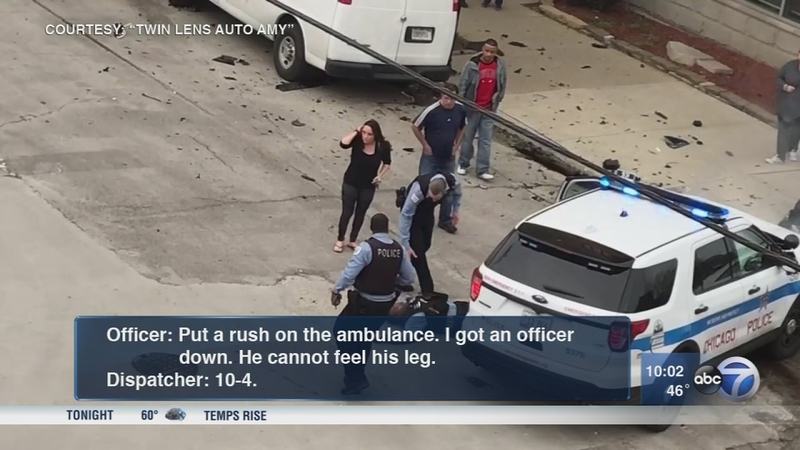 CHICAGO (WLS) -- Two Chicago police officers were injured in a crash in the city's Armour Square neighborhood while responding to shooting that killed one person and injured another on the Chinatown feeder ramp, police said.

A 9th District CPD squad car was involved in a crash at West 31st Street and South Shields Avenue with two other vehicles.

Cell phone video showed an officer lying next to his crumpled SUV with witnesses by his side until help arrived.

Witnesses said the officers in the squad car had their lights and sirens on as they went through a stop sign, hitting the other two vehicles.

"It was loud. It was another car hitting another car. You knew somebody was going to get hit. He was flying," said Sarah Molina, resident and witness.

The officers were responding to a call about a fatal shooting on the Chinatown feeder ramp of the Dan Ryan Expressway. Police said two people were shot around 5 p.m. while driving and crashed into another car.

The passenger jumped out and collapsed dead on the pavement. He was identified to the Cook County Medical Examiner's Office as Jeremy Scullark, 28, of the 800-block of Rockwell Street.

The driver tried to run away, but was found about a block from the scene. The driver was shot in the arm and taken to the hospital for treatment.

The Chinatown feeder ramp was shut down for an investigation by Illinois State Police.