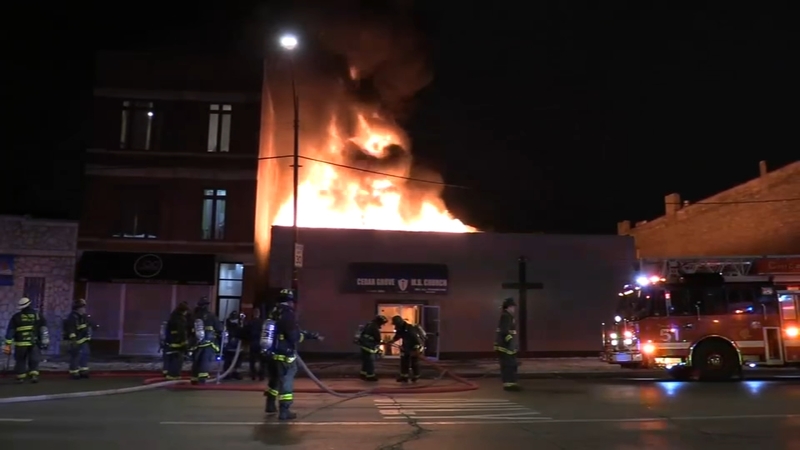 CHICAGO (WLS) -- Chicago firefighters battled huge flames at a church in the Englewood neighborhood on the South Side Thursday morning.

The fire broke out in the Cedar Grove Missionary Baptist Church at 5844 South State Street at about 3:15 a.m., the Chicago Fire Department said. Shortly after 4:15 a.m., CFD said the fire was struck.

CFD says no injuries have been reported.

The Cedar Grove Missionary Baptist Church had stood at the intersection of 59th and State streets in Englewood serving the community for a decade and has now been reduced to rubble.

The front entrance that used to welcome South Side parishioners crumbled to the ground after the fire destroyed the sanctuary.

Authorities say they first got reports of the fire at the church after the pastor's son Herbert Pennington Jr. called police

"At like 2:30, somebody banging on the back door telling us there was smoke so I run to the back first and I saw smoke coming out everywhere," he said.

When firefighter arrived there were flames coming through the roof of the building. Firefighters had to move out and attack the flames from ladders above before completely knocking it out.

Unfortunately, the building was a loss and the community it once served, heartbroken.

"I was born and raised up in that church first found myself in God in that Church did my first sermon in that church," said Wade Hudson, pastor of Moses Temple Holiness Church of Deliverance.

But for Pastor Herbert Pennington, this is not the end for his worshipers.

"Nobody got hurt," he said. "It's just a building and we will be able to go forth from here, just take one day at a time."

Already the community is coming together to help with nearby churches have offered up their spaces for the pastor and his congregation and other businesses offering to help the church for free.