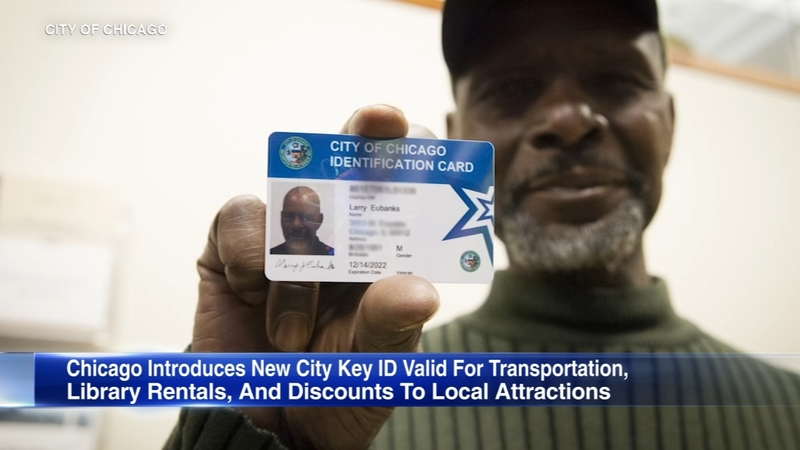 CHICAGO (WLS) -- Chicagoans can now sign up to be part the city's new municipal identification program and unlock perks throughout the city.

The Chicago CityKey will be a three-in-one card, to help people consolidate some of the cards in people's wallets. It will act as a valid, government-issued ID, a Ventra card and a library card.

"If you live in Chicago, you should feel a part of our city - not apart from it," Emanuel said. "The CityKey breaks down barriers and allows all Chicagoans to take advantage of the very best our City has to offer."

A new city identification card may help consolidate some of the cards in people's wallets.

The CityKey program has been years in the making.

The city partnered with more than 30 businesses, cultural and financial institutions, restaurants and sports teams to offer benefits and discounts to card holders. Those benefits includes a free day at the Field Museum and up to 25 percent off of Lyft rides.

The hope is card holders will take advantage of city institutions that they may have not been able to afford or access in the past.

"It's a unifier, it's about being Chicago proud so we want everyone to get this ID card," said Valencia.

Later this year, the City said it hopes to add more benefits for card holders including a pharmaceutical prescription drug benefit regardless of health care status.

But aside from the perks, Alderman Walter Burnett noted this will help those who have difficulty getting a state traditional state ID.

Chicago resident, Lynn Watkins said she plans to sign up for the program, but hopes the city will expand the benefits to help those in lower income areas.

"I hope that then we could partner with CTA, because someone these people might not have funding to get to some of the cultural institutions. So let's look at it broadly, as we are giving these opportunities. But we also need to partner city agencies to ensure that there is this cultural link for those in a cultural desert," Watkins said.

Elliot Powell said he is still undecided but sees the CityKey program as a step into the future.

"We're getting away from cash and we're moving more towards cards or apps or something like that," Powell said.

Starting Thursday, residents can sign up to apply for a CityKey card on the City Clerk's website. Valencia said the first 100,000 to sign up will get their IDs for free. After that, the cards will be $10 for adults, $5 for minors and free for residents who are 65 and older.

The card program is voluntary. City officials said all information collected for the ID will be kept private.

Conservatives have criticized the program, claiming it could open a door to voter fraud. When questioned by reporters, Emanuel called those claims a "red herring."

"It's about cultural equity and allowing our community to come and feel a part of what's going on downtown," the mayor said.