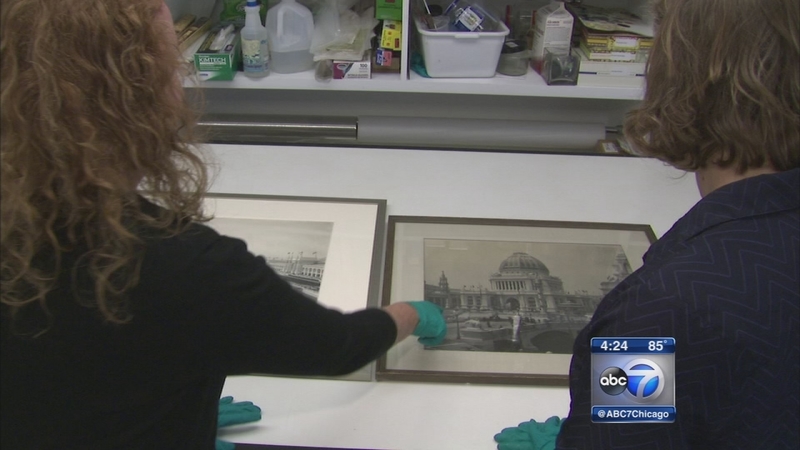 CHICAGO (WLS) -- The Columbian Exposition, or 1893 World's Fair, is still considered by many to be Chicago's greatest entertainment achievement. The Union League Club is bringing some of those old memories back into sharp focus.

The Union League Club Of Chicago is celebrating two things: the total remodeling of the Rendezvous Room and four old photos inside it from the 1893 World's Fair.

"Several members of the club were integral in establishing the fair. Daniel Burnham was a member of the club and, as you know, he was the designer and director of the Fair," art curator Elizabeth Whiting said.

Several other members also contributed, which is why these photos are so significant. They are the work of photographer Charles Dudley Arnold, who had a special platinum processing method -- and a good eye.

On the 9th floor of the club in the Conservator's Studio, the rest of this project is underway. Some of the photos have lost their brilliance and contrast, but they will be given new life.

"We've got 35 photographs in the collection," Whiting said. "We are right in the middle of a conservation project and I think if you look at both of these photographs you'll see the before ... and here's the beautifully restored after."

Arnold was the official photographer of the 1893 World's Fair. Those who wanted to buy a souvenir photo bought it from him. Twenty-seven million people attended the event.

"He owned the photographs and made the money. And if you were a newspaper who wanted to include the photographs, you had to pay him and get his permission," Whiting said.

How rich did he get? No one knows. But fortunately a wealth of photos was left behind.