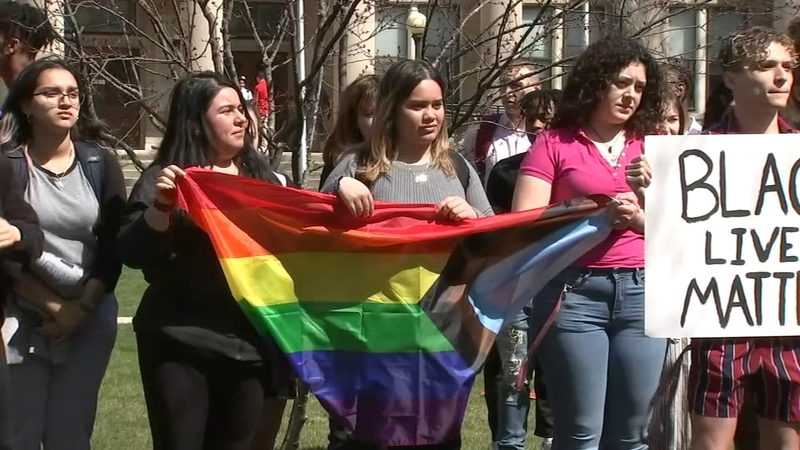 RIVER FOREST, Ill. (WLS) -- Students at Concordia University Chicago held a protest Tuesday over what some claim is an unwelcoming environment for LGBTQ students and students of color.

The students called out what they say is a culture of racism and homophobia on campus.

DeJon McAdory said he transferred to Concordia last year because he thought he could thrive. Instead, he said he's been made to feel like he doesn't fit in.

"Everybody has a story about the university and that's alarming," he said.

Students of color and LGBTQ students say they've long felt the environment at Concordia is unwelcoming, but were moved to organize the rally after a professor was banned from campus last week.

English professor Paul Stapleton said he and his wife, who is also a professor at the university, voiced their concerns about racism to the administration.

"The experience these kids have been having, which is one of being made to feel like second-class citizens on the campus of their alma mater," Stapleton said.

The university confirmed that Stapleton was banned from school grounds, but is still an employee Stapleton said he will still hold classes in person near the campus.

While Stapleton is not sure about his future at the school, he said he hopes "that the multi-cultural, pluralistic, multiethnic fabric of student body [will] be embraced and celebrated rather than made to feel as if it's a problem."

Concordia released a statement that said: "The university accepts and loves all human beings as God's children, including BIPOC and LGBTQ students. As an institution of the Lutheran Church-Missouri Synod, the university also adheres to the doctrine of the church."