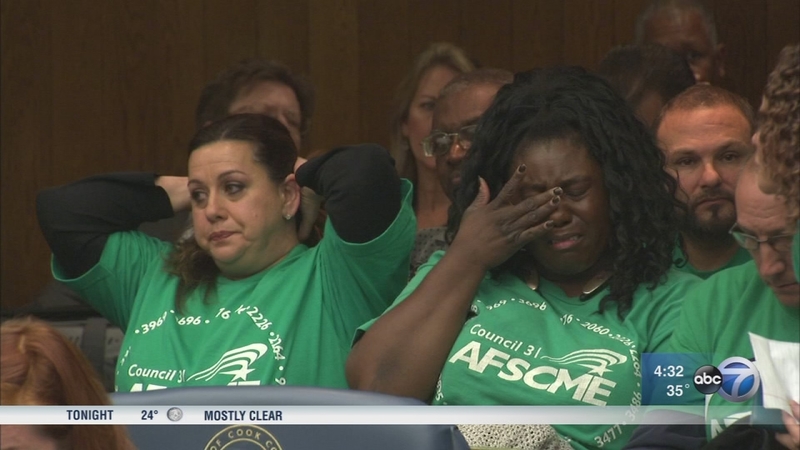 CHICAGO (WLS) -- The Cook County Board of Commissioners approved a $5.2 billion budget on Tuesday.

The budget includes the layoffs of 321 people and the elimination of 1,017 vacant positions to make up for the $200 million in revenue lost when the sweetened beverage tax was repealed last month.

"We never approach a budget cycle from the perspective of cuts, we always look first to revenue, we look to trim the fat, and then unfortunately it comes down to the human toll, which is kind of the crappiest part of what we do," said Cook County Commissioner Jeff Tobolski.

The commission voted 17-0 in favor of the budget.

"Through shared sacrifice and cooperation we were able to develop and pass a balanced budget," Cook County Board President Preckwinkle said. "We have had to make exceedingly difficult but necessary choices, but we have met our fiscal obligation to the people of Cook County. While at the same time protecting key public health and public safety services."

There was a lot of anger and emotion at the Cook County Board hearing Tuesday morning as dozens of county employees facing layoffs went before the commissioners begging for their jobs to be spared, or for commissioners to find other resources to avoid the cuts.

Two women who identified themselves as single mothers who worked in the Juvenile Probation Department teared up as they pleaded with commissioners to find a way to spare their jobs. Several other employees in that department said 39 of the 46 support staff positions will be eliminated under the proposed budget.

"I'm part of the 39 slated to be cut from the 46 support staff in our department, I'm a single a mother," Eboni McLemore said through tears.

Virtually every department in the county is facing cuts, with the greatest number of layoffs coming from the Sheriff's Department and the courts.

"The grand kids won't get as much as I would like to get for them, but we'll manage," said Tysha Franklin, a Juvenile Court Probation worker.

Cook County Chief Judge Timothy C. Evans said called the layoff of 156 people in his department "unprecedented." He said it was unfair that the Circuit Court accounts for 7.6 percent of the county budget, but suffered 48 percent of the layoff total.

"As a result, the court is about to suffer losses in several areas, including the Juvenile Temporary Detention Center and probation services that monitor both adults and juveniles in the community - during and after the time the cases are pending," Evans said in a statement.

Evans added: "We are considering our legal options, and we expect to say more on this matter early next week."