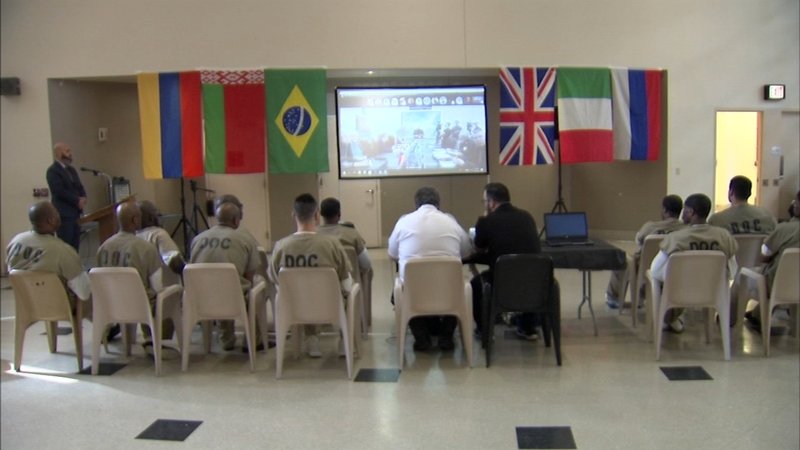 CHICAGO (WLS) -- For the first time ever, detainees at the Cook County Jail took part in a chess tournament competing against prisoners from around the world. The inmates are not only putting their skills to the test, but the game is also helping them change their lives.

Jonathan Ivory started playing chess five years ago when he first entered the Cook County Jail for murder. He discovered the game taught him lessons about life.

"To think things through. To be patient and don't go after the first thing that I see," he said. "Maybe there's a bigger picture. Look at things from a different perspective."

Ivory was one of several inmates and detainees who took part in the first international prisoner chess tournament of its kind Tuesday. They faced off against inmates from Armenia, Belarus, Brazil, England, Italy and Russia.

The chess program at Cook County Jail started several years ago, and many who are involved have become highly skilled at the game.

"This sport is transformative. It does things for people - they way they think, the way they look at the world, the way they operate," Cook County Sheriff Tom Dart said.

Many inmates agree that chess has given them qualities needed to navigate life behind bars.

"Most of us are locked up in cells for 18 hours a day," detainee Matt Luchins said. "It's 100 square feet, you and a cell mate, and there's very little to do."

Luchins has been in the jail for 15 months. He's charged with murder.

"This is something that we've all been excited about," he said. "It's something to look forward to, something to practice for and take your mind off the fact that conditions can be pretty dire."

And it's helped them focus on moving in the right direction once they're out of jail.