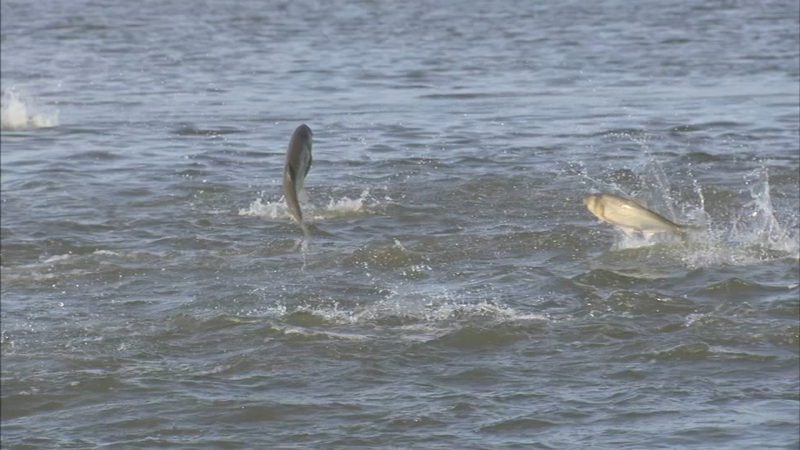 CHICAGO (WLS) -- What's in a name? As good ol' Bill Shakespeare said in "Romeo and Juliet": "A rose by any other name would smell as sweet."

The question now is: will Asian carp make it on more menus with its new moniker?

Invasive Asian Carp have presented a serious threat to the ecology of the Great Lakes for years. While the threat is still very real, the battle to keep them at bay has been largel

That's right, the name Asian carp was officially rebranded Wednesday as "copi" by the Illinois Department of Natural Resources. It's a nod to the copious quantities of the invasive fish in Illinois waterways.

"It happens to be delicious," said Joey Morelli, chef/owner of Max's Deli in Highland Park. "Like it's like smoked trout."

He said the rebrand from Asian carp to copi is the right move to get more people to purchase and plate it up for their palates.

The Great Lakes are home to some of the most beautiful waterways and shorelines in the United States, but invasive species are threatening their ecosystems.

"I hope to be sampling all weekend this weekend. Sampling, I'll have a bunch of it, I'll be walking around the tables," he said.

States across the Great Lakes region are collaborating on efforts to keep copi from entering Lake Michigan. A multi-billion-dollar barrier is currently in the design phase. And in the meantime, Illinois DNR is angling to reduce the carp population by making it the next Chilean sea bass, which was formerly known as the Patagonian toothfish.

"It does raise awareness about the problem, and so that's a good thing," said Molly Flanagan, COO & Vice President for Programs at Alliance for the Great Lakes.

But Flanagan said this isn't an issue with a simple solution.

"It's critical that we remember that we're not going to be able to fish or eat our way out of this problem," she said.

Flanagan said creating a physical barrier with federal and state dollars is the real way to make waves and keep copi out. But would ya eat it?

"I think probably it's a great use of a resource that's currently not being used at all," said Max's Deli customer Don Witt. "I would definitely try it just to see what it's all about."

And how about the new name?

"How about 'filet mignon,' is that taken? Because that has a ring to it," Otto quipped.

A list of recommended recipes using Copi can be viewed at ChooseCopi.com.

Restaurants where you can try copi in the Chicago area

Consumers can purchase Copi at the following locations in the Chicago area and Illinois.

Where chefs and grocers can purchase copi: