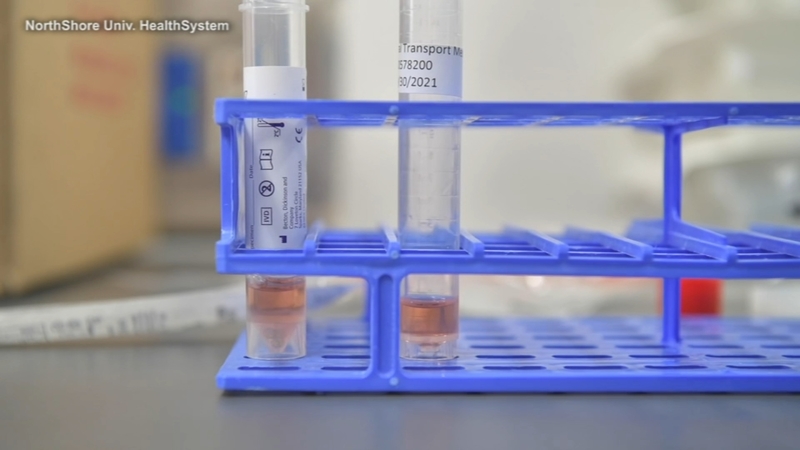 CHICAGO (WLS) -- Nearly seven weeks into Illinois' COVID-19 state of emergency, the ABC7 I-Team has learned that there is still a critical shortage of several major testing components, hampering plans for a return to normal. Testing people for the coronavirus remains a challenge for hospitals and laboratories because crucial equipment is not reliably available.

"We're still having difficulty getting supplies and that's been a challenge for us ever since this started," said Karen Kaul, MD, PhD, Chair, Department of Pathology and Laboratory Medicine, NorthShore University HealthSystem based in Evanston. "The vast majority of pathologists and laboratories report that they are having ongoing issues with materials, such as swabs that are really impeding our ability to expand testing to the direction that we'd like we'd like to."

"We don't have enough materials at the local level, where the patients are to do enough testing, and we need more materials in the hands of pathologists, in the laboratories they direct," said Dr. Patrick Godbey, president of the College of American Pathologists. "First of all it's swabs to actually take the sample. Next it's what you put that sample in to get it to the laboratory. And third it's the chemicals, the re-agents, used to turn out that result. And there's a shortage of all three."

The reason seems to be simple: manufacturing of these items hasn't caught up with demand. While some labs have shut down due to a lack of testing materials, the shortage has forced other pathologists to innovate with what they can get.

"I know of a number of institutions including our own that are doing things doing things like dividing our viral transport media into smaller tubes so we can basically double our sampling capacity," said Dr. Kaul. "Or we have validated phosphate buffered saline to use that instead. So we're trying to create workarounds" she said. "It is frustrating for us to deal with this."

In some cases, the high demand for tests is fueling competition even with state government agencies for the purchase of supplies. According to the latest figures from Illinois Comptroller Susanna Mendoza, state taxpayers have bought $4,292,650 in COVID-19 swabs, test kits, vials and transport components. An Illinois official tells the I-Team they're not competing with local hospitals and that those items are for both state labs and labs across the state.

While pathologists say the supplies are scarce and they have been left without what they need, a state official tells the I-Team that "if hospital labs are in need of supplies there is a form they fill out to request the supplies from the state."

"There's not enough reagents, swabs, transport media to test patients in the environment where they present a local emergency," said CAP president Godbey. "We need to be able to rapidly test those patients locally, and we can't do that. We can't do enough of it because we can't get the supplies," Dr. Godbey said.

There is short-term concern about the next two weeks, when Godbey says demand for testing is expected to increase by 40%.

"We've been told that our supplies will increase. But believe it when you see it," he said.