Coronavirus testing: Illinois lags behind most states, but rates improving 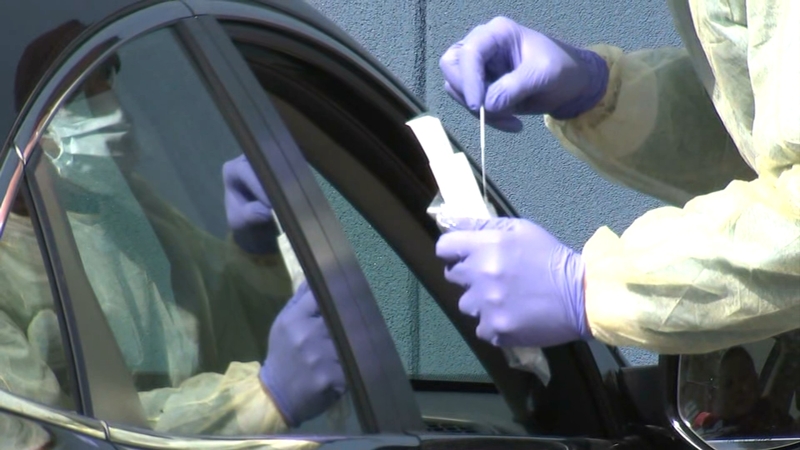 CHICAGO (WLS) -- Illinois lags behind the majority of states when it comes to coronavirus testing, but figures here are improving after a slow start.

At first glance the numbers are distressing; Illinois is ranked 28th nationally in the rate of COVID-19 testing due to a very slow start that sunk us deep into the pack. On March 12, only 300 people in Illinois had been tested.

Even though the pace began to pick up, as of Thursday, March 26, more than half the nation did more testing per population than Illinois.

New York and Washington are the best-performing states, but the rate of Illinois testing put us worse off than Wisconsin, Alaska and the Dakotas based on tests per population.

The good news is there has been a surge of testing in Illinois. From the new National Guard outpost on Chicago's Northwest Side to a private drive-through clinic near Lincoln Park, the result is what was a sluggish 300 tests two weeks ago increased last week and is now more than 50 times where it started at nearly 17,000 people tested. As of Friday evening, almost 22,000 total swab tests have been conducted in Illinois.

Testing continues to surge at several government and private sites in metro Chicago and northwest Indiana. Both states are now reporting the largest daily increase in cases so far.

"We're increasing testing, but not enough. There is a vast number of people who have COVID-19 who are not even tested," said Governor JB Pritzker.

"We did not have the capacity to test everybody that was asymptomatic and we still don't. We still don't," said Dr. Sunit Singla, critical care pulmonologist at UI Health. "We could very well see an exponential increase in the number of critically ill in the next week or two, we just don't know."

Even for those who have been tested, it still takes up to five days to get results and sometimes longer. Even as the state gets more test kits, the new problem is there are not enough lab technicians to process the tests.

The Indiana Department of Health responded with the following statement:

The Indiana State Department of Health (ISDH) is focused on testing the highest-risk and most severely ill people. The CDC offers guidance on testing (https://www.cdc.gov/coronavirus/2019-ncov/symptoms-testing/testing.html) and says not all individuals with mild illness need to be tested. This guidance helps those who have mild symptoms similar to a cold recover at home and allows the healthcare system to focus on patients who truly need emergent care. Individuals should monitor their symptoms and call a healthcare provider if those symptoms, such as cough, fever and especially shortness of breath, worsen. Providers have been told to use their best clinical judgment to determine who should be tested and to pursue private labs if the patient falls outside the criteria for testing by the state lab.

Every state has experienced challenges getting testing supplies. ISDH has been working diligently to expand testing through partnerships with Eli Lilly and the addition of other labs. The number of people tested has risen from 264 on March 20 to 6,936 today as a result of those efforts.
Report a correction or typo
Related topics:
health & fitnessillinoiscoronaviruscoronavirus illinoisi teamcoronavirus test
Copyright © 2022 WLS-TV. All Rights Reserved.
CORONAVIRUS TEST
You can now order 3rd round of free at-home COVID-19 tests
You can now order another round of free at-home COVID-19 tests
You can order another round of free at-home Covid-19 tests next week
White House releases new, closer-to-normal COVID pandemic plan for US
TOP STORIES
LIVE: 14 students, 1 teacher dead in TX school shooting, gov says
1 killed in 10-vehicle crash on I-294 in Glenview
Father of Texas yoga instructor accused in cyclist's murder speaks out
Alderman Michael Scott resigns to work in film industry
Iraqi living in Ohio allegedly plotted to assassinate George W. Bush
Evanston senior denied graduation walk for Native regalia on cap
Man fatally stabbed on train between downtown Blue Line stops
Show More
Chicago expected to move to 'high' COVID level by Friday, Arwady says
1st possible CA case of monkeypox believed to be in Sacramento
Truck driver killed after being hit by Metra train in Hainesville ID'd
Brendan Langley, fmr. NFL player, gets in scuffle at NJ airport
Minnesota mom charged with killing son; body found in trunk
More TOP STORIES News