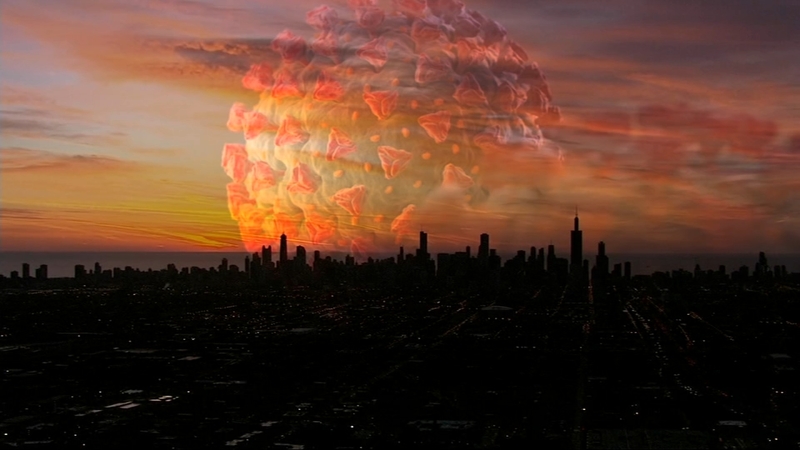 CHICAGO (WLS) -- The city of Chicago is imposing a wide-ranging vaccine mandate that will impact bars, restaurants, gyms and more after the first of the year.

Mayor Lori Lightfoot announced the new requirements Tuesday in response to the surge in COVID cases.

"Chances are everyone knows someone with COVID-19 right now," said Chicago Department of Public Health Commissioner Allison Arwady. "It's everywhere."

This new mandate applies to anyone five and older who is eligible to get vaccinated. It will take effect starting January 3 and is likely to remain in effect for several months.

That means going out to eat in Chicago will soon require people to bring not just their mask, but also proof of vaccination if they are going to be inside for more than 10 minutes.

"This new wave is seemingly more deadly than the last, spreading faster and causing profound harm," Lightfoot said. "To be clear, I've not been this concern about COVID-19 since the early days of the pandemic."

The mayor's requirement only applies to bars, restaurants, gyms and entertainment venues that serve food and drink, it does not include houses of worship or grocery stores.

Proof of vaccination will be required at:


"These are the places that are the most risky places for spread, which is why we're focused on them," Lightfoot said. "This order will remain in effect until the city deems that the threat of COVID-19 to public health as diminished significantly."

The city of Chicago is imposing a wide-ranging vaccine mandate that will impact bars, restaurants, gyms and more after the first of the year.

For some patrons, it's welcome news.

"I think it'll make people feel safe. It makes me feel safer. So I would think there are a lot of like-minded people out there like me," said Larry Knight.

"I know my employees have a lesser likelihood of getting sick of waiting on guests or around guests who are vaccinated," said Scott Weiner, The Fifty/50 Restaurant Group Owner.

"I don't think it's going to be that tough, this is no different than checking an ID for someone who wants a beer," he said.

Employees at the impacted establishments who are not fully vaccinated will have the option to be tested for COVID on a weekly basis.

The order does not go into effect until January 3 to give businesses time to adapt and train workers, but there will be enforcement and possible fines.

One restaurant owner said they are not against a vaccine passport, but it just adds another requirement for workers, which he called a "heavy lift."

However, it's been a pretty straightforward process at Replay in Andersonville.

"We have door people at the bar locations, they just check IDs as they check vaccine cards. It's been a non-issue," said Replay owner, Mark Liberson.

Liberson has been requiring proof of vaccination at Replay and his four other bars since June. While he has lost some business, Liberson said most of customers have supported the requirement and said a citywide mandate for bars and restaurants will make it easier to operate.

"I think what this is going to do, is really going to communicate a consistent standard, so we won't be the only ones," Liberson said.

"Establishments will be required to one post signage at each publicly accessible entrance and at least one location inside informing patrons of the vaccination requirements," said Ken Meyer with CMSR business and consumer protection.

The mayor's requirement only applies to bars, restaurants, gyms and entertainment venues that serve food and drink.

While the "get tested" or "show proof of vaccination" requirement may indeed make more people feel comfortable going out to eat, one restaurant owner is concerned that it could also have the opposite effect and further hurt their business.

"It is frightening thinking about how can this affect our business and even more than it already has, so it's a little bit frightening. But on the other end of that as just a civilian of Chicago, right, it is comforting because with the omicron cases sweeping through the United States now, I think it gives people a sense of security that when you're dining out you will be a little bit safer," said Niki Flores of Chicago's Pizza.

The Fifty/50 Restaurant Group said they are prepared for some pushback from customers.

"I think it might drive unvaccinated customers away and I'm ok with that," Weiner added.

Wiener is convinced having everyone vaccinated at his restaurants will end up being good for business.

The Illinois Restaurant Associated released a statement following the announcement that said, "Chicago's hospitality community is in a very fragile stage of recovery. Throughout the pandemic, the industry has prioritized customer and team member safety above all else, and the IRA strongly supports vaccinations for everyone to mitigate the spread of COVID-19. We encourage all diners to please lend their cooperation, respect and kindness to the employees working to comply with the new mandate during these challenging times."

This new mitigation effort is aimed at stemming the spread of the omicron variant, which the CDC now says is responsible for 73% of all new COVID cases.

The announcement comes as Illinois reported the largest single-day increase of the year Monday, with 12,328 new cases. Health officials also said 60% of the state's population is now fully vaccinated, as of Tuesday.

Right now, there are nearly 4,000 patients with COVID in Illinois. More than 800 of those patients are in ICU beds, which worries some health care workers at Silver Cross Hospital in southwest suburban New Lenox.

"We are nearing our capacity but we do have contingency plans in place to add ICU beds if needed," Dr. Atul Gupta, medical director with infection prevention at Silver Cross Hospital. "We're hoping not to get to that point."

In Chicago and suburban Cook County, availability is better. Across Will and Kankakee counties only 5% of ICU beds are available.

Test positivity rate in Illinois is now at 7.1%.